Category | One on One/ Interviews
There’s no such thing as certainty in a couple, but our age differences make the effects of time on our intimacy irrelevant, and I think that creates a more harmonious relationship. 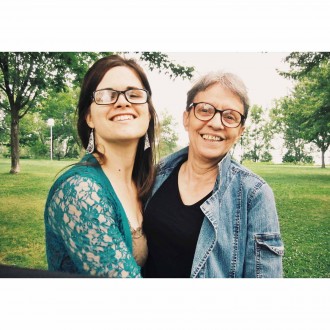 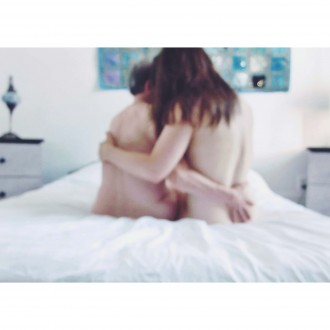 “For what we lack in time, we make up for—infinitely—in the life we share.” Marie-Pier (26) and Ginette (63) have been in love for four years. They shared the secrets of what keeps them together, despite 37 years of difference.

How did you first meet?

Marie-Pier : We met on a dating site. I’d been single for a year. I clicked on the description on Ginette’s profile and wrote to her on New Year’s Eve. Even though she was looking for a woman who was within five years of her own age, I wanted to be part of her life. The communication and the conversation were very profound and we had the same values. So many questions were running through my head in terms of my age. Would she judge me? Would she find me credible?

When I saw her, my goal was to put her at ease. I wanted a chance with her. The first time she took my arm, I right away felt this warmth and sweetness.

Ginette : When I got her message, there was some content, and I thought to myself “this girl is brilliant”! So I decided to see where the conversation would lead. We chatted for four months, but by the time a month and a half had gone by, the seduction had begun. Me, I was really hesitant because of the age difference, but awfully happy to be courted for all that. I’ve always been bold in life, and the discussions we had were so pleasant, so true and so fresh, that I became a teenager again, with butterflies in my stomach. At the time, I was living in St-Jean-sur-Richelieu.

I was really scared of our first visual contact, and I was telling myself, in the bus bringing me to Montreal, “You old fool, what are you going to do there?!” There I would be, introducing myself, with my 59-year-old body, to a young woman of 22. In our discussions, Marie-Pier had demonstrated such sensitivity, such openness and maturity. And when I saw her, it was all confirmed. She made me discover so many things. She opened up a world I never knew. It was a new dimension for me. I realized that life went on.

Marie-Pier : Two weeks after our first meeting, she invited me over to her place. I was happy to discover her world. I was really awkward, but we kept talking. We were sitting in front of the computer, cuddling together …. We were looking for some nice mood music, and it started to get dark outside. There was no more bus so I was going to spend the night with her. She went off to slip into something more comfortable and came back in a magnificent black ensemble. We laid down in her single bed, face to face. We touched each other and then we started to kiss. I was really nervous and really awkward. And that night was our first time. All of our senses were awakened and everything seemed to be moving in slow motion. My heart was beating so hard, in anticipation and happiness, that it made my ears ring.

It was like I was intoxicated. Her skin was so soft that I wanted to cuddle with her for hours on end, and I was so moved that she trusted me to go this far. Weirdly enough, we barely said a word. We just let our bodies dance. The only thing I felt a little uneasy about was my insecurity about my own body—my physical defects, my hair. Our sex life works because we’re constantly respecting each other and taking the time to laugh and tease each other. From the minute we’re together, we want to just grab each other and make love. I get the feeling we don’t even think. There’s no room for doubts or restraint. We respect each other and we’re always encouraging each other to let go, in harmony.

Ginette : I was really nervous too, as if it were my first time sleeping with someone. And then that feeling just switched when we ended up lying beside each other and I took her in my arms. I was this adult woman, taking full advantage of an exceptional situation. I exulted in the fact that life was spoiling me so, offering me this pretty and intelligent young woman. I savoured those first moments intensely. I’m turning them over in my head to this day. I was torn between desire, the modesty that comes with age and the pleasures of the flesh that overwhelmed me. But all reason went out the door when I felt her hot, tender lips on mine.

At that moment, I couldn’t give a crap about my age and my body and its folds. Lust took over, and it was the moment alone that mattered; the rest didn’t exist. My sexuality was such a difficult thing: I grew up in the country and it was seen as forbidden. Women my age grew up for the most part in the closet or with a shut-in sexuality. I’ve taken charge of my sexuality since I’ve been with Marie-Pier. Our sex life is fulfilling, it’s recharging, it’s life-giving. It’s a complete renewal that has happened at the end of my life.

Ginette, how do you feel with your body?

Ginette : My body is changing and Marie-Pier is helping me so much to accept myself as I am. The way she looks at it, her desire to touch it and tenderly kiss it—it’s so reassuring. We’ll make a joke of it sometimes by exaggerating the scars of inexorable aging, by laughing and making fun of time. You can’t pretend reality doesn’t exist, and I’m giving Marie-Pier full freedom to choose, to have a sex life with a person of her own age. We consider these things when we talk about the future. There’s no way I’d pull a jealous fit if she wanted to experience something else one day. I would consider her choices completely understandable. There are no restrictions between us. We probably have the souls of artists because we find ourselves so beautiful together. A picture, they say, is worth a thousand words…

Marie-Pier : Her body is changing, for sure, but that doesn’t mean that feelings change. The flame and the emotions in our sexual relations are always present and always strong.

How did your entourage react to your age difference?

Ginette : For me, it was simple because I don’t have any family or friends. But I did have a lot of apprehension about meeting Marie-Pier’s family, and especially her mother. I’d had a really bad relationship with mine, but knowing Marie-Pier, who grew up without constraints and with such openness, I couldn’t help but have trust in hers. We’ve never suffered from discrimination in public, never any negative things. And yet we know sometimes there can be danger.

Marie-Pier : In the beginning, Ginette signed all her emails with “G.” I would never have imagined that she would have the same name as my mom! It kind of made me think a little, but I wasn’t going to let a name ruin everything. I have a really close-knit and open-minded family. I’d always been attracted to older women so I knew my family would be receptive. My mom, well, she reacted to the name because hers is the same, and my dad just listened and smiled. Ginette met my mom first. My mom had bought her a scarf and everybody was really nervous. Now the two Ginettes are the best friends in the world. She gets along well with my father, and my sister is her biggest fan.

My friends had a really positive reaction. I’ve lost far more friends for political differences than I have for Ginette. We get a kick out of our age differences; it’s really become a game between ourselves.

What is it that makes your relationship work?

Ginette : We’re living in the moment; we’re absolute pals. We tell ourselves that we’re stardust that has to reassemble again. We complete each other, I’m the daredevil and she’s cautious. But she follows me. And we’re also open to possibilities because one person can’t necessarily always fulfill the other. There’s no such thing as certainty in a couple, but our age differences make the effects of time on our intimacy irrelevant, and I think that creates a more harmonious relationship.

Marie-Pier : I don’t feel the need to seek out an affair with a person of my own age because I’m fulfilled, psychologically and physically. We do little kindnesses for each other; we have these rituals like putting the other person’s slippers on the doorstep. We’re never bored, we always have something to talk about. Ginette is all action, where I’m reflection. Our day-to-day lives are measured out in sharing, with little surprises and kindnesses, like making coffee, leaving little notes, hiding little presents. We aspire to the same goals and we share the same objectives for the future. Just because there’s a major age difference doesn’t mean we don’t want the same things. There’s nothing nicer between Ginette and me than to know that we can be face to face for hours, sharing thoughts, discussing and creating, without getting bored. That’s the key to our relationship, because we’re growing as people, together and individually.

Do you have any worries about the future? (and here the emotions take over)

Marie-Pier : We don’t talk about it, but we think about it.

Ginette : It makes me sad. It’s sad because we can’t spend much time together. Because, just because of the way things are, I’m going to die before Marie-Pier, and time is running out. We’re living in the present. The fact of having to leave her all alone makes me sad. Because of this, I made my will, so she doesn’t have to endure illness…

Marie-Pier : But we still have projects when Ginette retires two years from now. When she’s retired, we’ve got this book project in mind, feminist projects, finishing university and going to live in Scandinavia.

Ginette : Stay open, don’t set limits for yourself. Everything is possible, and don’t listen to “standards.” You just have to take the good things that come your way.

Marie-Pier : The way to make your sexual orientation work is to state it, loud and clear.