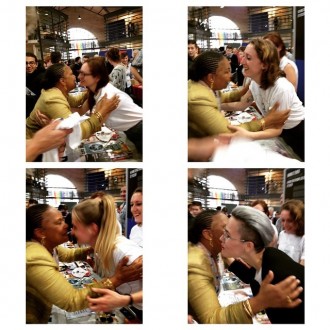 Christiane Taubira with our friends from Barbi(e)turix.

As the Minister of Justice, Christine Taubira opened the way for weddings and adoption for gay people in France. She resigned yesterday in a report.

During her political career, as an Attorney General, Christiane Taubira introduce the electoral promise of François Hollande, it became law 2013-404, which legalized same-sex marriage in France.

During Parliament debates, where her presence is constant, her numerous public speakings and her abilities arouse respect. That particular debate (on same-sex marriage) is an important step in her political career. In 2013, the bill on same-sex marriage is approved by the National Assembly on its second reading with 331 votes against 225, with 10 abstentions.

With her departure, France’s political world loses an important figure.

Christiane Taubira starts her career as a separatist, she then participates in the creation of the Guianese political party called Walwari. Deputy in the first district of French Guyana from 1993 to 2012, she is the driving force behind the bill that recognized human trafficking and slavery as crimes against humanity. Member of the Radical Party of the Left at the 2002 presidential elections, she ends up 13th on the first ballot, with 2,32% in votes. She is attorney general, Minister of Justice from May 16th to January 27th, 2016; first under Prime Minister Jean-Marc Ayrault I and II, then under Manuel Valls I and II. In that period, she defends the bill for same-sex marriage and adoption. Her work is saluted by the left-wing while the opposition fears her penal code is too permissive.