Category | News
Here, people are satisfied with simply respecting the way in which each individual chooses to identify. 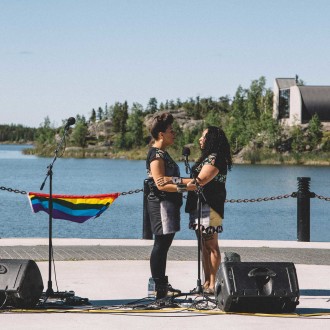 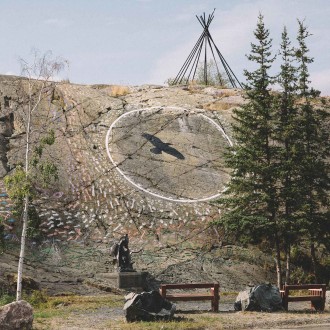 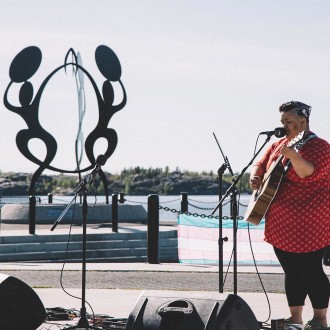 It’s shortly after 3 p.m. on Saturday, August 6, in Yellowknife’s Somba K’e Park. Winnipeg poet Mona Youssef, about to launch into her performance, confesses to the audience that this is a very different Pride than the one she’d imagined. The sentiment is most likely shared by many in the crowd who are first-time visitors to the area. Defying preconceived notions, there is nothing small or “marginal” about the fifth edition of NWT Pride.

Back in Somba K’e Park, steps from City Hall, we walk among the 1,500 gathered for the day’s festivities. At the edge of Frame Lake, throat singers, baladi dancers, poets and various artists ply their trade. A barbecue and a yoga class round out the afternoon’s program, as do workshops on topics such as health, parenting, identity and empowerment. We notice a remarkable thing: women are in the majority, both as attendees and participants. This finding secretly delights us—generally, men are the ones with greater visibility.

Those who imagined the event would attract only members of the LGBTQ+ community were mistaken. Many residents and tourists attend the performances, tour the information booths and partake in the family activities. The scuttlebutt travelling through town is that the closing night celebration at the Pride Garden shouldn’t be missed. Alternatively, an alcohol-free event will also be taking place.

Allies from many local institutions supported the festival’s organizers. Among them: sponsors at the military base, who hoisted the rainbow flag; and the local brewery, NWT Brewing Co., which produced NWT Pride’s “first signature (queer) beer,” the Rainbow Ale. Business owners throughout the city shared their memories of Prides past, and vowed to pay a visit to the 2016 edition. They welcomed guests with a cheery “Happy Pride,” coffee and colourful pastries.

As for the City of Yellowknife, it marked the occasion by offering up two rainbow crosswalks. The gesture is viewed as a public declaration by Iman Kassam, the director of NWT Pride: “It’s a symbol of pride and power for queer Yellowknifers who belong to a minority that has historically been invisible.”

A Model of Inclusivity

While no territory is free of homophobia and discrimination, based on its Pride weekend Yellowknife can hold itself up as a model of acceptance and inclusion. While discussions are well underway in Montreal regarding the proper use of acronyms for members of the LGBTQ+ communities, these concerns appear obsolete north of the 60th parallel, where the different terms relating to sexual orientation and gender expression are traded with ease. Here, people are satisfied with simply respecting the way in which each individual chooses to identify.

The same goes for matters of sexual health. Regardless of your gender or orientation, condoms and dental dams were distributed to attendees with equal frequency. Pride is a time to celebrate, but that doesn’t mean issues as important as consent, security, respect and equality weren’t taken seriously. Just because we love to have fun doesn’t we have nothing to say. It’s a necessary balance—one that the organizers of NWT Pride delivered on brilliantly!