Category | Happenings
I grew up in the Montreal of the 1990s, when there was a lot more space for creativity, given that rents were low and the cops mostly turned a blind eye to the underground nightlife. 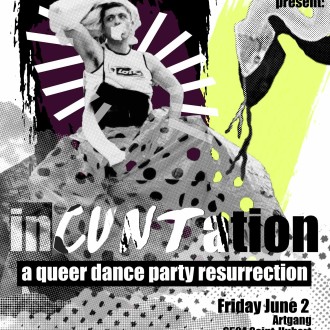 Calling all weirdos! After a long hiatus, queer dance party favourites POMPe and Gaybash are back for a one-night bacchanal. We spoke with POMPe founder Laura Boo about the magic of the underground, the coolest LGBTQ+ orgs out there and what is needed to throw a big, bold blowout.

Let’s talk about your POMPe parties. What led you to launch them back in 2010?

I had been throwing events—dance parties, cabarets, concerts, festivals—for about five years in both Vancouver and Montreal. Most of my events were very DIY and underground, held in punk houses and such. I blurred the lines between activism and party planning; I wanted to throw accessible, community-focused events, but that almost always involved mainly volunteer labour. By 2010, I was looking to do bigger events, to go “professional” and throw parties that balanced the priorities of the partygoers and the artists. I wanted to bring that underground queer punk love to the dance floor every single month and create an event for weirdos and queers—a cheap date night that paid artists a fair wage.

The Gaybash nights were a staple of Montreal’s LGBTQ+ scene at around the same time. Is there something about our present moment that compelled you to revisit them now?

I met Sally and Tyler from Gaybash in 2011. What they were doing had a different style, but it was fundamentally similar: they wanted to create experiences and they saw nightlife as a way to express an artistic vision. We ended up collaborating on a huge all-night event called “Night at the Races,” where more than 600 people showed up. It was explosively magical.

But Tyler and Sally got a little burned out on nightlife, just like I eventually did after five years of monthly POMPe parties. I took time off because I was drained and exhausted; that break lasted a year and a half.

About two months ago, Sally called me up to say it was time we got back in the game and I realized he was right. I missed it so much. Nightlife can be vicious and competitive, but with Sally as a collaborator I was less nervous. We were strong enough together to resurrect ourselves.

We always want to know more about cool queer folks and what they’re up to. Are you involved with any other LGBTQ+ initiatives?

Up until I went back to school, I was very involved with Radical Queer Semaine and Pervers/Cité, both of which are incredible underground queer festivals in Montreal that combine fun and politics. And I performed a lot with the weirdo/queerdo burlesque collective Glam Gam Productions.

Nowadays I volunteer and fundraise a lot for LGBTQ+ non-profits. My favourites are Head & Hands (which offers a free clinic that gives trans folks access to hormone therapy on the informed consent model), Project 10 (a queer youth drop-in), the Prisoner Correspondence Project (which connects LGBTQ+ prisoners with pen pals on the outside) and ASTTEQ (which offers essential services for trans folks).

I’m also a fan-girl of some incredible queer nightlife powerhouses, such as the folks behind Slut Island, Cousins and Glitterbomb. If you haven’t heard of them, get to Googling.

If you had to describe a Montreal queer in three words, what would they be?

What are your hopes for the future of the city’s party and events scene?


That it can survive gentrification and real-estate speculation. I grew up in the Montreal of the 1990s, when there was a lot more space for creativity, given that rents were low and the cops mostly turned a blind eye to the underground nightlife. In the last 10 years, Montreal has gotten fancy. Along with that comes noise complaints from condo owners who should have purchased in the suburbs if they wanted silence, as well as higher rents at all the venues. You can’t throw a party without a venue, but there are fewer and fewer places to hold creative, weird, experimental events for outsiders. Bar owners want you to be upscale—they’re looking for a “pretty,” boring crowd that will pay $12 for a drink.