Category | Arts & Culture
Interligne gives conferences and workshops on the realities of LGBTQ+ folks, and compiles information about acts of violence committed against members of LGBTQ+ communities. 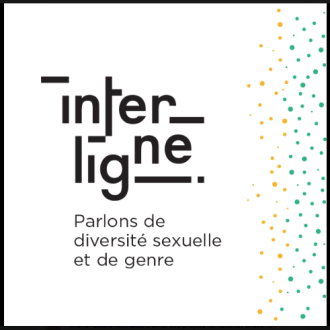 Lac St-Jean native Sophie Paradis may be best known for her star turn as Manon Lesage in L’Auberge du chien noir, but these days she’s taken on a new role: spokesperson for Interligne, the first response centre for LGBTQ+ communities.

1- When and how did your artistic journey begin?

Arts and culture have been a part of my life since early childhood. My mom was a pianist. She sang and taught music, in Alma, Que. My dad performed and sang in operettas at the Chicoutimi carnival. He also acted in a few plays. My brother was involved in improv, theatre, visual arts and music. When I was very young, I learned a bit of piano from my mom and then I played baritone saxophone for many years. By the time I was in high school, I was taking theatre and improv classes.

However, the desire to act really hit me in CEGEP—that’s when my shyness took a back seat to me wanting to express myself. I’d planned on becoming a chemist but quickly realized I vastly preferred the college’s arts and literature program, where I could major in film. Once I had a chance to star in A Midsummer Night’s Dream, organized by TNM au Collégial, I knew I wanted to be an actress!

So I auditioned for the theatre program at Collège Lionel-Groulx in Ste-Thérèse, Que., and was admitted. After graduating in 2001, I tried out for tons of film and TV roles. I did guest appearances here and there before being chosen to play Manon Lesage in L’Auberge du chien noir. During the show’s 15-year run, I was also able to take on a few side jobs: Jeanne in Histoire de famille and Lina Trottier/Laurie Berthier in Mémoires vives, as well as summer stock, some musical projects, public readings and voiceover work.

No. My first year out of school, I was very impressed—even intimidated—to be collaborating with people I’d admired since childhood. I didn’t want to be labelled; I was afraid it would harm my career. Also, I wanted recognition for the work I was doing, not for my sexual orientation.

But after a while, avoiding the subject became too unwieldy so I started talking about it openly like I had in theatre school. The news spread, and most people quickly accepted it.

That said, I still caught wind of homophobic remarks, and people blundered when they used terms laden with negative connotations. Those words may have been aimed most often at gay men, but they hurt me deeply. They were meant for my friends, my community and, by extension, me. I came to realize that I wanted to raise awareness about the impact words can have.

3- What’s the biggest challenge you’ve had to face?

As a gay actress, my most significant challenge has been to just be myself! No matter how tolerant the people around me, it was my responsibility to assert myself as a gay woman, to stand tall in the face of latent homophobia, to behave diplomatically and then to keep moving forward.

At some point in my career, people started telling me it was in my best interest, and in the best interest of my professional future, not to speak about my sexual orientation too much. That comment carried enough weight to make me question myself. Should I ignore or hide who I was?

My sense of integrity, my strength of personality—what might even be a rebellious nature—fortunately pushed me to keep my head held high and to be at ease with myself. I decided to ignore those influential voices in the industry. I found my way to my partner, we started our same-sex family and I’m profoundly proud. Today, I am as open as ever about my lover, my son and my family.

4- What are your hopes for the future?

As a woman working in my field, I still face numerous challenges. While there is notable progress, and constant work being done to achieve it, parity is still far from a given. There are more substantial and lucrative roles for men than for women. And the salaries are far from equitable.

I don’t have the power to change things, but I’d like parity to become a reality, the industry to value women’s roles, and women to be better represented in the work being made here. I’d like it if matters related to sexual orientation didn’t require constant “coming outs,” but instead were part of everyday reality, without fanfare.

We live in an era where the status of women is not yet what it should be. We need to keep “fighting,” the way our foremothers did, to assert our rightful place in all spheres of society. Women with character, dynamism and authority should finally be recognized as such, and not deemed to be hysterical, PMS-ing or emasculating. I dream of the day men as a whole will no longer feel threatened by a woman in a position of authority.

I have nothing against men—I just want women to be able to take their rightful place in society.
__

5- Why did you decide to get involved with Interligne?

The more people know about Interligne, the more we can reach people who need help. LGBTQ+ folks or their loved ones can call the helpline, chat, text or send an e-mail if they need support. If allies of LGBTQ+ folks, health professionals, teachers or social workers have questions about LGBTQ+ communities, they can contact Interligne to get information or to be referred to other resources.

Interligne gives conferences and workshops on the realities of LGBTQ+ folks, and compiles information about acts of violence committed against members of LGBTQ+ communities.

Naturally, this cause is a personal one for me. I hope with all my heart to leave my son with a more open and informed society than the one we currently live in. If my slim contribution can help move us in that direction, if it can help some people, it’ll be a step on the road to progress.

6- Where should we be focused on improving matters?

It’s important to note that in Quebec, in 2018, it can still be difficult for trans folks to safely access health care. And some health professionals trivialize requests from lesbians for screening tests (Paps, for example) and wrongly deem them to be unnecessary. It’s only by reporting these incidents that we can begin to think critically and to improve the services received by LGBTQ+ people.

We live in an era of profound change when it comes to values—as seen with the #MeToo movement—and language. I believe there is an ongoing collective reflection regarding the use of words, and that’s a good thing. The words we use have an impact.

Change rattles, and even shocks, many people. That’s normal. However, the changes I’m talking about are vital and deeply necessary if we’re going to build a more inclusive society in which respect, curiosity and attentiveness are cultivated to allow us to live in harmony with one another. My vision might be idealistic, but I believe in it! Everything isn’t perfect, because we are all human and imperfect, but I see progress—and that moves and cheers me.

7- Who are the women that you find inspiring?

It’s tough for me to name just a few—I admire many of them! I respect women who hold high-level positions in purportedly male professions. I admire politicians, athletes and mechanics. I celebrate all moms raising kids—it’s no easy feat! I respect women who denounce the atrocities and the oppression they’ve experienced—that’s profoundly brave. I admire important women throughout History with a capital “H,” for the progress they made and the ground left to cover. I love women…naturally!