Category | One on One/ Interviews
There have been many great women’s champions—strong women who changed tennis and sports in general. 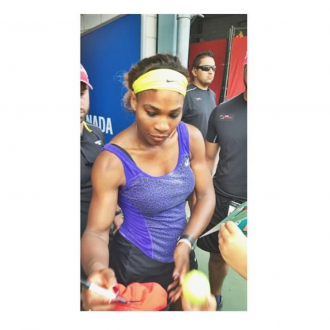 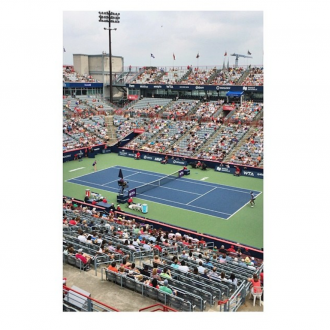 Yesterday, we met with Valérie Tétreault, a former professional tennis player who’s now the communications coordinator at the Rogers Cup.

1- Tell us about your career as a player. What are the highlights for you?

The match I’ll always remember is definitely my first round at the Australian Open against one of my childhood heroes, Kim Clijsters. It was a very special moment for me, a dream that became a reality. I was lucky enough to play on centre court at a Grand Slam in front of almost 15 000 people against a great champion. The first set was over fast, but I upped my game in the second set and made her fight for it.

Besides that, I’d say my Fed Cup matches. I’ve always been very proud to represent my country. Tennis is an individual sport but for a few days during Fed Cup, you’re part of a team. The pressure is different because your results affect not only you but your entire team. And at the same time, you feed off your teammates’ energy. It was great to share the wins…and the losses, too!

2- Was it natural for you to stay and work in tennis?

I found the best of both worlds. When I decided to come off the Tour, I wanted to work in communications. It was a field I had started to discover when I was playing and I liked it. I’m lucky to have had opportunities in tennis really quickly. And it’s a great time to work in the sport with all the recent success of the Canadian players and the momentum that creates.

3- Tell us what you’re up to this week as the communications coordinator at the Rogers Cup.

Things get a little crazy during the tournament, but it’s a good kind of crazy! It’s the culmination of an entire year of work. Of course, there are so many media requests, so I make sure that we get good coverage. I also collaborate with the WTA on media availability and player activities. It’s always a little different for me at the women’s event because I see a lot of familiar faces and I get to catch up with friends.

4- Is tennis accessible to women? More so than other sports?

Along with golf, tennis is one of the only sports in which women can make a good living. Tennis is thriving right now and it’s becoming more and more popular with young girls. There have been many great women’s champions—strong women who changed tennis and sports in general. And most of the majors award the same prize money to men and women, which is rare in sports.

5- Recently, it’s been widely published that tennis is gaining in popularity. Why do you think that is?

Much of the recent popularity stems from the fact that Canadian players are making a name for themselves at the international level and are able to compete with world’s best. People who have never watched a tennis match are suddenly interested in the sport. The exact same thing happened in the 1990s with Jacques Villeneuve’s success.

6- There is an LGBT focus this year at the Rogers Cup. Tell us about this new concept and why it was important to add it to the program.

Tennis Canada’s mission is to promote tennis, and we are always looking for new potential players. We want the Rogers Cup to remain accessible and we take different actions to ensure it does. I think it’s a nice nod to the LGBT community. And the response has been positive so far, so we may do it again at the next event.