Category | News
Conversion therapy, or reparative therapy, is the pseudoscientific practice of attempting to change a person’s sexuality or gender identity.

So-called reparative therapy has no basis in science, can lead to depression and dysfunction and is widely condemned by leading health organizations. So why haven’t Canadian governments banned it?

By the spring of 2014, Andrew Perrin wants to die. The 20-year-old has been trying for two years to rid himself of his attraction to men, but nothing is working. “I’ve fucked my life up,” he writes in his journal. “I feel absolutely worthless. I can’t serve God in the way that I want. I’m too depraved.” His drive to change had begun during a work-study trip to Hawaii after his freshman year of university. There, Perrin developed his first real crush. He’d been attracted to boys before, but, growing up evangelical in British Columbia, he’d kept those impulses secret.

Perrin confided in a female friend who’d also experienced same-sex attraction. She suggested he visit her church in Langley, B.C. She knew of a man there, a high-school teacher who’d had feelings for men but was married to a woman. Maybe he could help. While Perrin was skeptical, he gave it a shot. At their first meeting, his mentor drew a tree. The fruit, he said, was Perrin’s same-sex attraction. But the root was something called “homoemotional need.” It was caused by a lack of healthy male relationships in childhood, he explained. Because Perrin hadn’t been close to his father, or to many boys growing up, he was misidentifying his need for male bonding as same-sex attraction.

Perrin didn’t buy this theory at first. But his faith was important to him, and he wanted to understand why it couldn’t coexist with his sexuality. So the men continued to meet, at first once a week, then every month or two. They’d discuss scripture, go on hikes and share long, intentional hugs. Mostly, they spoke of their struggles with same-sex attraction and how bonding with men platonically could help ensure freedom from sexual sin. At rst, the meetings helped. “Suddenly I had hope,” Perrin says. “If I could reconnect with men in a ‘healthy’ way, then one day I’d be normal and straight.”

Conversion therapy, or reparative therapy, is the pseudoscientific practice of attempting to change a person’s sexuality or gender identity. These efforts may include spiritual interventions by churches or ministries, or secular ones at the hands of a professional therapist. In recent years, major health organizations worldwide have denounced conversion therapy. In a 2015 statement, the Canadian Psychological Association announced that it opposed “any therapy with the goal of repairing or converting an individual’s sexual orientation, regardless of age.”

So if you mention conversion therapy today, most people will either assume it’s a thing of the past or a fringe practice performed at remote camps by Bible belt fundamentalists. In reality, it’s widespread. A 2018 study conducted at UCLA’s Williams Institute in Los Angeles found that in the United States, nearly 700,000 LGBT adults have been subjected to it. Researchers estimated that an additional 57,000 youth will receive the “treatment” from a religious advisor before adulthood.

There are no comparable Canadian statistics. Here, conversion therapy happens quietly—in churches, livings rooms, therapists’ of ces and at retreats—making it difficult to track. The language used by religious groups to discuss the practice obscures it further, says Peter Gajdics, whose 2017 memoir, The Inheritance of Shame, details the six years he spent in reparative therapy. “Organizations will never advertise themselves as practising conversion therapy,” he says. Identifying them becomes a semantics game. “They’ll use words like ‘achieving sexual purity’ and ‘breaking bonds.’ That makes them hard to detect.”

Most groups deny they’re doing conversion therapy at all, reasoning that their goal isn’t to turn people straight. Instead, participants are encouraged to suppress their attraction so that it might weaken over time. Homosexuality is rarely framed as a disease in need of curing, but rather as something one can learn to control.

Not all organizations are tied to churches or ministries. For example, Quebec-based Ta Vie Ton Choix claims to have no religious affiliations. On their site, visitors can inquire about workshops and support groups, as well as referrals to professional therapists who can help them join the “thousands of men and women who have been liberated from homosexual thoughts, attractions and behaviours.” (When contacted for an interview, the organization declined to comment.)

Groups, secular and religious alike, position themselves as welcoming to queer people—sites of compassionate support for consenting adults. But, Gajdics argues, even when people enter into conversion therapy willingly, there’s coercion at play. “You’re largely motivated by the shame and stigma you’ve grown up with. To me, that’s not actually consensual.”

Anecdotally, gay men seem to have undergone reparative therapy most often. That may be because toxic masculinity causes men to heavily police one another’s gender and sexuality—or because women’s sexualities are seen as less threatening. Nonetheless, queer women, trans women and non-binary folks are also affected.

In 2011, Alex Barter, a B.C. native who identifies as non-binary, was encouraged to undergo conversion therapy when they were attending Bible college in the U.S. After a teacher learned Barter was queer, she encouraged them to meet with members of a visiting ministry. Barter was made to disclose the names of every woman they’d been linked to romantically and whether sex had occurred. Ultimately, Barter put a halt to the meetings, but the damage was done. “For the next three years, all my romantic relationships were casual and secretive,” Barter says.

Some conversion-therapy techniques are overtly disturbing. A preliminary study released in May 2018 by LGBT organization L’Alliance Arc-en-ciel de Québec sought to shed light on the practice within the province through interviews with seven survivors. One respondent was made to fast for three days before attending his Pentecostal church. There, three men held him down while a pastor screamed in his ears to exorcise the demons within him. He was 12 years old.

In January 2014, Perrin logged on to Grinder. “I needed someone to hold me. I was in so much pain,” he says. On his way to meet his match, Perrin told himself he wasn’t going to have sex—he wasn’t ready. But once inside the man’s apartment, Perrin felt his body shut down. He’d never learned how to say no. His date assaulted him. “I went to get an STI check to find out if I had HIV,” he says. “I was hoping I did—I thought I deserved it.”

Depression, anxiety and trauma from his assault led to a breakdown later that year. While indoctrination might not do obvious damage in the short term, “In the long term, it kills you,” Perrin says. “Your sexuality becomes a battleground.”

The banality of the interventions with his mentor is what made them so cruel, Perrin says. It’s hard to recognize abuse when it’s masquerading as compassion, and the illusion of choice makes it hard for participants to leave.

“My church would probably say, ‘You self-initiated; we were supporting you,’” he says. “But where did that desire come from? You facilitated me thinking being gay wasn’t okay and you’re not taking responsibility at all.” 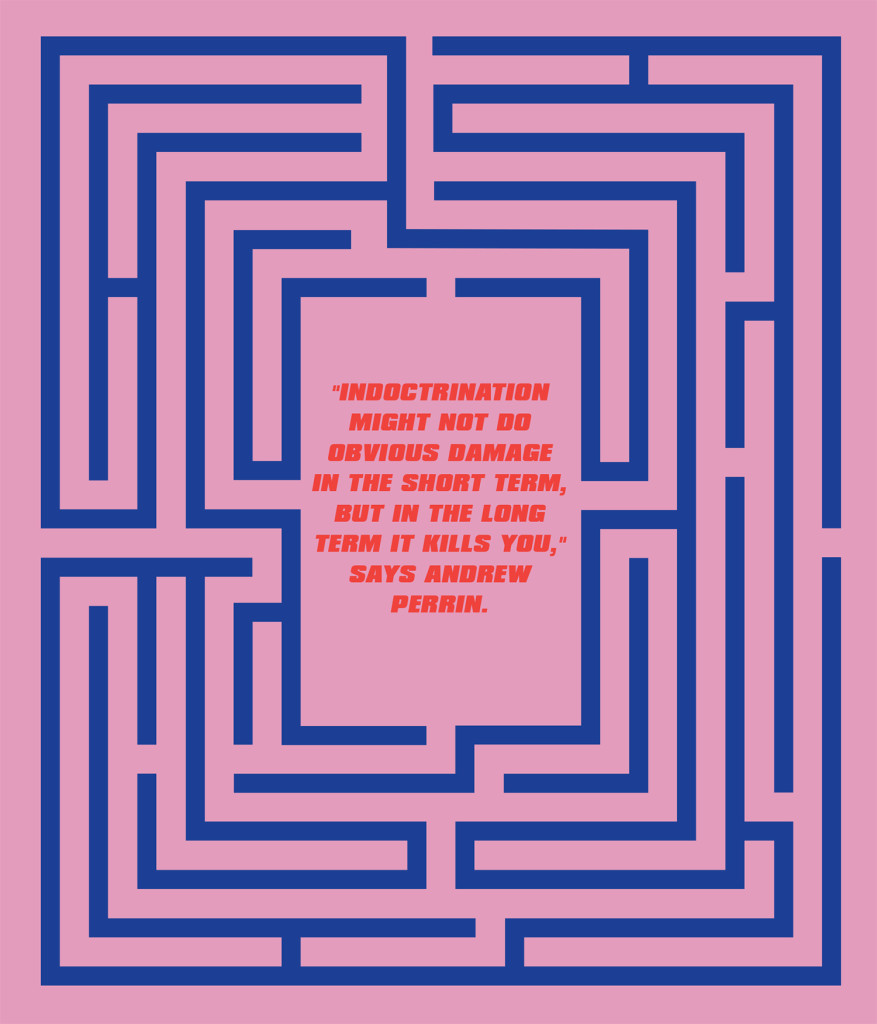 Despite conversion therapy’s harmful effects, Canadian governments have been slow to ban it. Three areas restrict the practice, to varying degrees. In Ontario, it’s illegal to offer it to anyone under 18, and OHIP funds can’t be used to pay for it in adults. Similarly, in 2015, Manitoba introduced a health regulation that prevented fee-for-service professionals from billing for the practice under the province’s Health Services Insurance Plan.

The City of Vancouver’s ban is more comprehensive: it prohibits businesses—including religious groups that charge a fee—from providing services intended to change a person’s gender identity or sexual orientation.

While these regulations help lower the incidence of conversion therapy, they leave some practitioners free to carry on. If a group provides reparative therapy to an adult in Manitoba or Ontario, for example, it’ll remain unaffected by the law, so long as the practitioners aren’t professional therapists and don’t bill back to the province. And religious groups providing mentorship free of charge wouldn’t be affected by Vancouver’s ban.

Organizations seem to understand this. While reporting this story, I contacted several, posing as someone searching for help with same-sex attraction. In August, an Ontario- based associate at the Freedom in Christ Canada ministry spoke with me during a 45-minute intake phone call. Gently, he told me there was no guarantee I’d come out of a subsequent in-person session changed. He also repeated that he wasn’t a licensed therapist, and that the session would be free.

The push for legislation continues: Nova Scotia put forth a bill to ban conversion therapy for youth under 16 in September, and a bill is expected to be introduced in Alberta this fall. However, Canada still lags behind the United States, where 14 states have banned the practice. When asked to comment on the Trudeau government’s stance on conversion therapy and whether the Liberals intend to ban or criminalize it on a federal level, Randy Boissonnault, special adviser to the prime minister on LGBTQ2 issues, declined to be interviewed.

Jen Takahashi, a spokesperson for the Lethbridge Public Interest Research Group, admits that conversion therapy is difficult to legislate. Her organization, along with activist group YQueerL, helped convince Alberta politicians to table the upcoming bill banning reparative therapy. Takahashi says several factors slow the process. First, most politicians don’t realize that reparative therapy still exists. Second, protecting minors is one thing, but it’s hard to convince governments to extend bans to include anyone over the age of majority. “You can’t tell an adult what they can and can’t do,” she says.

Finally, she’s concerned that leaders are hesitant to openly advocate for trans rights. “You can use the cute gays [for social points], but the minute governments step up and say, ‘We stand in solidarity with trans people,’ that’s the minute they risk losing votes,” says Takahashi.

For her part, Ashleigh Yule, a registered psychologist who specializes in LGBTQ+ health, worries that gender- nonconforming folks are particularly at risk when it comes to conversion therapy. She works with children and teens, some of whom have undergone the practice.

The Calgary-based therapist believes that conversations about how to treat trans and non-binary children and teens are mirroring the discourse surrounding gay conversion therapy from decades past. “There’s this idea that if we make kids more gender-conforming, they’ll be healthier, happier adults,” she says, “But research seems to be showing the opposite.”

Telling a person they can or should change their gender or sexuality can have long-term effects, including substance abuse, chronic depression and dif culty forming relationships. And given that suicide rates among LGBT+ youth are high, Yule says, we need to adopt all measures possible to protect them. Conversely, when LGBT+ folks receive affirming care, the difference in outcome is striking.

After his breakdown, Perrin began seeking out groups like the Gay Christian Network, which celebrates queerness alongside faith. Learning that he could be both religious and gay was groundbreaking—and helped him see his mentorship as an insidious form of reparative therapy.

Perrin’s boyfriend of two years, Josh, also survived conversion therapy. They each struggle with internalized homophobia, shame and dips in self-esteem. As a couple, though, they’ve begun to forge queer friendships. And this summer, Josh taught Perrin to cruise. The simple act of making eye contact with another man felt radical.

Perrin keeps a blog where he details the pain of conversion therapy. In September 2017, he posted a poem, inspired by a quote from a queer friend who’d survived a similarly traumatic evangelical childhood. Occasionally, he returns to it: