Category | Sex & Relationships
Why should we use a dental dam when straight people don’t? 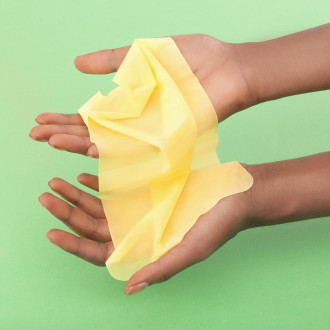 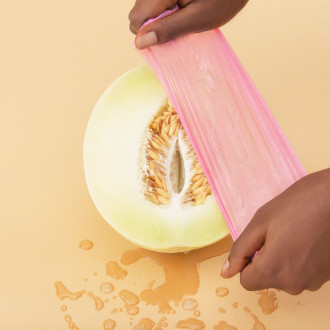 Very few lesbians use protection as a way to practice safer sex on a regular basis. So here’s a primer on our very own, deeply misunderstood, prophylactic.

If the average queer woman were to encounter a dental dam—otherwise known as the lesbian condom—and wanted to use it effectively, she should first be aware it’s not meant to help with excessive salivation or crooked teeth. In fact, it’s the best defense we have to prevent female to-female sexually transmitted infections. To understand why, read on.

In 2010, an Australian team surveyed 330 women who had engaged in oral sex with another woman. The findings revealed that only two per cent of respondents used a dental dam on a regular basis. “If a girl started talking to me about it, I’d be surprised. I’ve never had a partner who used one,” says 21-year-old Diana. A 2015 survey conducted by Autostraddle, a website for queer women, turned up similar results: more than 75 per cent of the 8,566 respondents didn’t use dental dams. An additional barrier to dental dam use is the prevailing myth about the unlikelihood of contracting a sexually transmitted infection through sexual contact between women, especially since the vast majority of studies assert that the most unsafe practices involve penetration with a penis. “Why should we use a dental dam when straight people don’t?” asks Michelle, 56.

Sexual orientation does not guarantee protection against STBBIs. According to the United States Department of Health and Human Services, STBBIs are transmitted from skin-toskin contact and through vaginal fluid, menstrual blood (mouth-vagina) and sex toys. Among participants in a 2005 Brazilian study by V.M. Pinto et al., 38 per cent of lesbian and bisexual respondents reported having contracted a sexually transmitted infection once in their lives.
According to Dr. Jeanne M. Marrazzo, a contributor to the 2010 textbook Lesbian Health 101: A Guide for Clinicians, lesbians are more likely than heterosexual women to be affected by human papillomavirus (HPV, which, in the long term, can increase one’s risk of cervical cancer) and herpes —two infections for which there is no cure. Helen, 41, admits that she’s never used protection because she didn’t think it necessary: “I’ve only had four partners in my entire life, but my last partner had HPV and I caught it. I don’t know how I’m going to find new partners now.”

Compared to straight women, lesbians are also more at risk of contracting vaginitis, which is transmitted through direct contact with vaginal fluids. In Lesbian Health 101, Dr. Elizabeth Lorde-Rollins notes that when a woman is infected, there is a greater chance that her partners are too. Vaginitis is easy to combat with antibiotics but increases the risk of transmitting other STIs when left untreated. Many people think that safer sex kills the magic. “What makes me feel comfortable with a partner is talking about what I enjoy, like my sexual needs and limits. But protection, I don’t think I’d be able to talk about that,” says 18-year-old Jade. There are numerous resources that provide information about safer sex, including Autostraddle’s online guide “Lesbian Safe Sex 101” and the website womenshealth.gov, which offers simulation exercises to help women prepare for discussing STBBIs with a partner.

Studies show that LGBTQ+ women are less apt to see a gynecologist. In Lesbian Health 101, the authors point out that lesbians are more likely than their heterosexual counterparts to have a negative experience at the doctor’s office and therefore tend to consult medical authorities less often. Gabriella, 23: “I asked my doctor to test for STBBIs and he answered that it wasn’t necessary because I’m a lesbian. I had to insist.” Even in 2016, it can be challenging to find comprehensive health information for women who have sex with women. Research (based on small sample populations) often finds that the probability of transmission is very low. But that doesn’t necessarily mean that the risk of infection is negligible. Several medical guides, including Lesbian Health 101 and 2008’s The Fenway Guide to Lesbian, Gay, Bisexual and Transgender Health, emphasize that there is little reliable information for physicians to hand out and that the issue is unlikely to be front and centre on government agendas. The sensitive nature of the subject, the barriers to access and the lack of available (and relevant) information all diminish the likelihood of dental-dam use. While researchers agree that more knowledge means a decreased risk of infection, the medical and scientific communities continue to overlook queer women.

If you’re crafty, make your own dental dam and save some money in the process. All you need is a condom and a pair of scissors.

1. Unwrap and unroll the condom.
2. Use the scissors to cut off both ends.
3. Cut the resulting tube lengthwise. Voila!