Category | News
The idea is more to highlight the work of lesbians in communities and society in general. The number of lesbians involved in militant communities for a multitude of causes should not be underestimated. 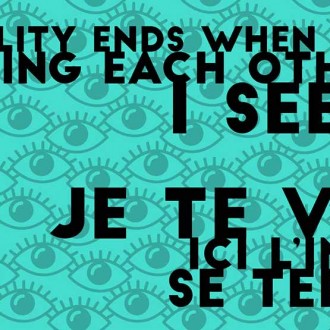 “I see you. Invisibility ends here.” For the fourth edition of its Montreal march, the Dyke March collective proclaims its commitment and ambitions loud and clear. For the occasion, all people identifying themselves as lesbians are invited to march for homosexual women’s visibility. One week before the gay pride celebrations, as dykes step up to be the first to take to the streets, we meet with two members of the organizing collective.

What is the Dyke March?

Laurie-Anne: The Dyke March has existed in Montreal since 2012. It always takes place one week before Pride, the first week of August. The march was originally created in a spirit of community, to bring together a group of people who identify as lesbians. The idea is to do something by and for lesbians. We’re an independent collective. We’re not subsidized. We’re doing this by ourselves with the good intentions of everyone who wants to get involved with us.

Valérie: Initially the idea for the Dyke March came from the Lesbians Avengers in the US, a group of lesbians in Act Up who had the idea to create Dyke Marches to make lesbian issues more visible. What I hope is that the Dyke March encourages more people to campaign for lesbian visibility. We believe in the diversity of the initiatives. We encourage lesbians to create their own projects. You can have groups like Dykes on Bikes, who join us on bikes, who get involved differently, and so the march evolves.

On August 13, Montreal Pride is also holding a Dykes and Allies’ March. What’s the difference between the two marches?

Valérie: There is the more institutional version and a more grassroots version. The Dyke March is more political, non-mixed, anti-capitalist, anti-patriarchy. The Dyke March shows that lesbians can organize themselves and do things that catch on in a big way without the support of an institution. Even though lesbians are working to make these institutions more open, it’s still really difficult to keep the spotlight on lesbians when men are so overrepresented at Pride and lesbians are so underrepresented in society. There’s a two-fold challenge. That’s why both of our organizations are doing work that is completely different, but just as important for the community.

Laurie-Anne: With more than one march, we can multiply spaces for visibility. Bringing together everyone in a single crowd is not reflective of reality. There are people of different political preferences and mindsets who don’t necessarily recognize each other in the official representations of the community. There are Pride ideas in which the people taking part in the Dyke March don’t necessarily believe. But despite our differences, at heart we all want lesbian visibility. That’s what unites us, and I hope that that will never change. We just met with two organizers of the lesbian march; we’re going to write a press release together.

Why have you chosen a non-mixed march?

Laurie-Anne: I think it comes down to this idea of visibility. We thank the allies for their support and help, but we want to put the spotlight on lesbians. The presence of allies blurs this idea somewhat. We’re demanding completely lesbian spaces. We want to show that we’re able to create things and occupy spaces by ourselves without necessarily needing an institution’s support.

Valérie: By “lesbian” we mean any person who identifies as one, i.e. any woman who is cis, trans or intersex, or any person of non-binary gender who is queer, genderqueer, intersex or bispiritual and who identifies as a lesbian, bisexual, pansexual, lesbo-romantic and/or queer. We’re very inclusive. We want to highlight the fact that identity can go beyond gender, that there are many ways to experience one’s gender. What’s important is not so much that you identify as a woman, but that you identify as a lesbian. We want to show a diversity of people, a diversity of realities—a diversity of ways to be lesbian.

Why has the word “radical” been removed from the Dyke March name?

Valérie: It’s mainly for the sake of redefinition. The radical lesbian movement is a theoretical and community movement that existed in Quebec. The issues were different. Without forgetting history, we want to create something current and rooted in our situation. What is it to be a lesbian today? Why continue to campaign when we’ve acquired so many rights? What does lesbian visibility mean today? Our idea is that lesbian visibility isn’t just about being visible in the eyes of the heterosexual world, it’s about being visible to ourselves. Hence our slogan. The march is a moment of visibility for lesbians who have been made invisible in their places of work, in the street, in their living environments—those who don’t “look like lesbians.”

Laurie-Anne: We also see ourselves because we’re participating collectively in a thing in which we’re able to recognize each other and interact together. It’s forming ourselves into a network.

But you’re still calling for a certain political commitment?

Laurie-Anne: Since the Montreal Dyke March was created, without it being necessarily radically anarchist or extremist, it’s always had a political side. In 2012, it was the student strikes, last year it was against austerity. In general, we’re bringing together people from political and militant milieus. The word dyke is also something of a political appropriation of the word lesbian, a little like gouine in France or “PD.” It’s the idea of taking a highly pejorative word and making it our own.

Valérie: The idea is more to highlight the work of lesbians in communities and society in general. The number of lesbians involved in militant communities for a multitude of causes should not be underestimated. We wanted to reach them and tell them “your message is important and we want to join you in supporting issues that are specifically lesbian.” It was important to combine the struggles.

Laurie-Anne: The Dyke March is more than a gang of angry lesbians or simple parade. It’s truly a political commitment. It’s a group of committed women uniting for a cause.