Category | Happenings
ACCT members select the television and digital productions that have stood out for their boldness, their vitality and their ingenuity and that have succeeded in stirring the public’s passion for made-in-Quebec television. 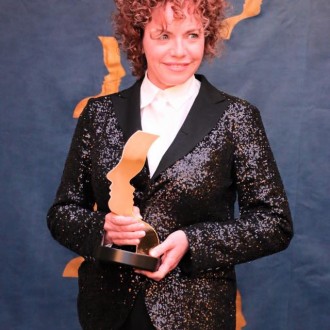 The Web series FÉMININ/FÉMININ took two statuettes at the 30th Prix Gémeaux in Montreal last Sunday. Every year the members of the Academy of Canadian Cinema & Television select the best of what’s broadcast on our screens in television and the digital media.

It was a proud moment for the entire team that contributed to the project.

The first season, launched on the Web in June 2014, garnered highly positive reviews in numerous international publications, Websites and blogs in France, Australia and the US.

We’re doubly happy that the series has been recognized here in Quebec—a little more lesbian visibility in the mass media. It earned three nominations this year, with Macha Limonchik and Alexa-Jeanne Dubé competing against each other in the same category.

By the end of the afternoon preview, two statuettes had been won by the FÉMININ/FÉMININ team.

/ From the Web to television

Broadcast on France Télévisions and available on ICI Tou.tv, the Web series is known for the realism of its direction and its well-known actresses.

The production is currently in development and a season two is pending with television broadcaster ARTV.

To view the series:

To celebrate what is best on our screens—that is the mission, at once simple and complex, of the Prix Gémeaux. To do so, the members of the Academy of Canadian Cinema & Television select the television and digital productions that have stood out for their boldness, their vitality and their ingenuity and that have succeeded in stirring the public’s passion for made-in-Quebec television. In 30 years, the Prix Gémeaux have become a major celebration. From the original 35 categories of programs, professions and acting rewarded, the Academy today hands Gémeaux out in 110 categories, paying tribute to the creators of images that bring the small screen—and the mobile screen—to life.