Category | Essays
« Even though I'm afraid of being judged, I'm not afraid of speaking up. Every experience with abuse is different. » 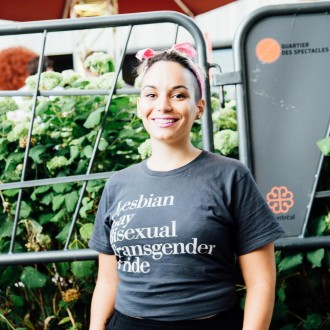 Audrey’s first romantic relationship with a woman was a lesson in domestic violence. Despite the many years that have now passed, the harassment has not yet subsided and the consequences of her relationship continue to be a challenge to her everyday life. As time goes on, she continues the struggle to rebuild herself. And in this challenge, Audrey recognizes how important it to share her story and shed light on conjugal abuse.

/ How did the violence first start?

I was 21 years old, young, naïve and still in the closet. A week after first meeting F. she confided that she was being evicted from her apartment. So, I offered to let her stay with me until she could get back on her feet.

One evening, after we got back from seeing a few of her friends, F. was in a really bad mood. I tried to calm her down. She grabbed me and threw me to ground. I was covered in bruises. She immediately apologized saying “I’m so sorry I flew off the handle, I didn’t do it on purpose”. We had only been seeing each other for two weeks at that point. We stayed together for nine months, but my therapists say that during that time I experienced years worth of abuse. She hit me once or twice the first two months, but from then on it only escalated. At the time, I didn’t see it as conjugal violence. Maybe I had difficulty seeing it that way because she was my first girlfriend. I thought of it as a normal relationship issue. I even cheated on her with a woman who was abusive. In my eyes, abuse was normal. She constantly told me that I was shit, a bitch and that I wasn’t important. Throughout the course of our relationship I had three concussions and attempted suicide three times. I thought that death was my only way out. I thought that the only control I had was through self harm. It’s hard hearing people talk about their first love because mine was so painful. I was hurt emotionally, physically and spiritually.

/ What were the key moments that led you to leave the relationship?

It was when my best friend Shannon asked me to leave F. She couldn’t support seeing me like that any longer. I refused and she left my life. After that, she even refused to shelter me even if I did eventually decided to leave F. But once I finally did it, Shannon came back. My mother also played an important role in my decision to leave. One day, I called her in tears. I couldn’t bring myself to call the police and F. was threatening to lock me in a room and to sell my body. She had shaken and strangled me. She emptied my purse, stole my bank card and left while saying how she now had control over my money even though she already did. During a family dinner, my mother told everyone that I was in an abusive relationship and asked them to help me move out. The very next day, everyone got together at my apartment. In an hour, we packed up all of my belongings. I left two forks, two knives, two plates because F. had another girlfriend and a cheque for $350 to avoid any problems.

/ How were things after you left?

I fell apart. Leaving her behind was one of the most difficult things that I have ever done. I missed her then and I still miss her now. Up until that point, I only did what she told me to do. I didn’t breathe, eat or function without her. When I left, I had to make my own decisions. Only victims of conjugal violence can understand what that’s like.

One Saturday evening, the police knocked on my door. I was spending the evening at home watching a movie. They came to arrest me for the attempted murder of F. The previous evening, I had sent her a message forgiving her for everything and wishing her all the best. She then called 911 and accused me of trying to slit her throat. I was put in jail for 72 hours and eventually released on the condition that I don’t approach her, her school, which she no longer attended, her place of residence, which was under my name or her place of work although she didn’t have a job.

/ Can you explain why you missed her?

I still miss her. When a person takes all of your dignity and confidence you belong to them. I’m learning that I don’t belong to anyone. But in reality, she still has a hold on me. Even though I’m now married and happy, if she reappeared I would immediately be fearful again. I confuse fear with love and I still feel as though certain parts of me belong to her. She was charismatic, funny, everyone loved her and she was well spoken. She could practically beat me with others around and no one would say a word. Through it all she lost a lot of friends, but not me! If one day she gets clean, I’ll welcome her back with open arms because there are parts of her that only I understand. In an abusive relationship, you become very vulnerable and lose parts of yourself. You give something to that person which you would never think it possible to give. And once that’s done, you’re broken. She broke me forever.

/ Will you ever heal from this experience?

Yes, but I will never be the person that I once was. I’m a new person but I’m not sure who yet. Regardless, I continue to put one foot in front of the other and try not to be a victim. But it’s very hard. And even though I’m afraid of the future, I still want justice. Until my abuser takes responsibility for her actions, I think that I will continue to be a victim. This is something that I am coming to accept. I’m trying to forgive myself for all of the mistakes that I’ve made. A person once asked me if I regretted meeting F. and after some thought I told her that had I not met her, I wouldn’t be the person that I am today. I think that may have been the best answer I could have given.

/ Has the harassment continued over the past three years?

The intimidation has not stopped. The worst has always been the physical abuse. Sometimes just a look is enough to cause great anxiety and fear. When I first met my wife, she would change her hair colour regularly. F. would then copy her hair every time. She even tried to slit my throat after hearing about my engagement. But it’s easier to manage the situation by keeping some contact with her than by to not having any contact at all. Quite frankly, she’s a really wonderful person when sober. But the drugs ruin her.

After the attack, I decided that it was time to finally seek help and I found the Centre de Solidarité Lesbienne (CSL). Over a period of two years, they were able to help me come to terms with many of my problems. Eventually, I came to realize that I was suffering from post traumatic stress. The CSL was even able to provide me with a referral for a therapist.

Four years of happiness together so far. My wife was very aware of the situation and about my feelings with regards to my abuser. She is my rock and she is so gentle too. We’re trying to start a family. It’s hard and amazing all at the same time. When we first met, I had already been apart from F. for a year. She made me feel like such a princess. To this day she always makes me feel special. But I also have to learn how to feel special on my own.

/ Is it important for you to talk publicly about what happened to you?

I did a lot of research on conjugal violence in lesbian relationships, but found no information. Sharing these things is difficult especially when people may not understand where I’m coming from. Even though I’m afraid of being judged, I’m not afraid of speaking up. Every experience with abuse is different. If I can help others by coming forward with my story, I will continue to do so with pride. I understand that not everyone is in a position to speak up about violence. That’s a position I respect. Honestly, if you had asked me to do this interview three years ago, I would have said no.

/ What message would you like to send to our readers?

If you are being abused either verbally or physically, leave and seek help. Go to the CSL. Tell yourself that you are worth saving even though it’s so easy to fall apart.