Category | Happenings
We couldn’t have imagined a better collaboration, especially given the current context in which it’s become more important than ever to support local businesses. 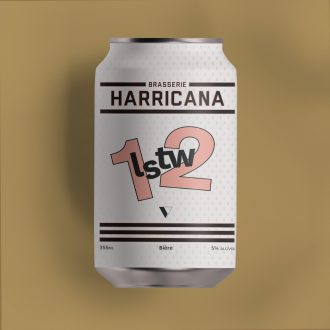 The women entrepreneurs behind lstw magazine and Brasserie Harricana launch #12 lstw beer in cans to support and promote local products and LBGTQ+ businesses.

Montréal-based lstw and Brasserie Harricana are once again joining forces to raise LGBTQ+ visibility and promote local women entrepreneurs. Brewing in-house in their Mile Ex brewery since its opening in 2014, Marie-Pier Veilleux and Cynthia Santamaria are staunchly committed to the LGBTQ+ community. Aiming to support its positive local initiatives, these passionate brewers are actively involved in events across Montréal and Québec.

“Ten years ago, when I met the women behind Brasserie Harricana, we instantly clicked. We couldn’t have imagined a better collaboration, especially given the current context in which it’s become more important than ever to support local businesses.” Florence Gagnon, founder of lstw

“Creating #12 lstw beer is a dream we’ve had for a long time, and we’re thrilled to finally be launching this collaboration. We’re really looking forward to having our customers and beer aficionados discover it.” Marie-Pier Veilleux and Cynthia Santamaria, founders of Brasserie Harricana

lstw is proud to be teaming up with the women of Brasserie Harricana to launch #12 lstw, a local craft beer brewed in Montréal, by Montrealers.

DESIGN
Harrison Fun, the Montréal studio behind lstw‘s new visual identity and branding, and Carolyne De Bellefeuille, artistic director at lstw, adapted the can’s new logo and creatively paired it with Brasserie Harricana’s BH signature. Montréal-based Hart Print oversaw the printing process. The #12 on the can represents 2012, the year lstw was founded.

DETAILS
#12 lstw is a delicate lagered golden ale with hints of clover honey aromas. It is available online now through Brasserie Harricana in 6-, 12- and 24-packs for $24, $42 and $80, including taxes and deposit. Curbside pickup begins on April 30.

ABOUT BRASSERIE HARRICANA
Long-time friends Marie-Pier Veilleux, who has a background in restaurants, and Cynthia Santamaria, who has a background in scientific research and LGBTQ event promotion, joined forces to create Brasserie Harricana. Founded in Montréal’s Mile Ex neighborhood in 2014, Brasserie Harricana is a dining room, taproom lounge and microbrewery in a warm and upscale decor. Dedicated to creating beers for everyone, from the most inexperienced novices to expert beer connoisseurs, Brasserie Harricana has designed a simple and inclusive menu featuring ethically sourced ingredients of the highest quality.

In addition to the brewery’s enduring favourites, Brasserie Harricana releases ephemeral beers crafted in its aging cellars. In Harricana’s 60- wood barrel hall, brewers experiment with fermentation techniques to create exciting, uniquely flavoured and rare brews. Brasserie Harricana’s craft beers are featured in its selection of 44 taps at their Jean-Talon address and served in bars and restaurants in and around Montréal. They are also sold in bottles and cans through specialized retailers across Québec.