Category | Lifestyle
The concepts of femininity and masculinity are personal seeing as how what is considered feminine for one person might be masculine for another. 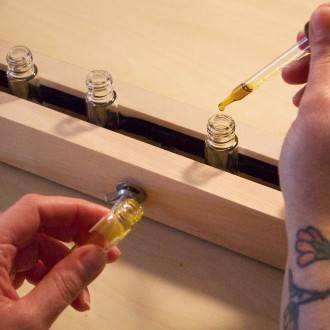 Inspired by a want for simplicity and to go back to the basics, this past November, Julie Jones launched three essences, Les Lares. We could not help but be drawn in by her surprising journey and approach towards creating a unisex fragrance.

1- You worked at Coupe Bizarre, Helmet, Arielle de Pinto and also in pastry. How did you come to work in fragrances?

I have always been very sensitive to scents. We worked with a lot of very chemical products at Coupe Bizarre and I hated that. Because I felt bad presenting these products to my clients, I would tell them to use their own products at home, like argan oil or hand cream all just to limit the number smells. During my time at the salon, my sister passed away and it was very difficult. I withdrew from everything and found refuge in nature in a house with no electricity.

I needed silence and I needed to figure out how to deal with everything. The retreat allowed me to reconnect with nature and myself. A year later when I came back to Montreal, I registered for a botany course which offered training in perfumery. As I began to notice people’s reactions to essential oils, I understood the power of fragrances. Strangely enough, one night I had a very vivid dream (cliché, I know…) about a recipe that would eventually become my first perfume, Cognac à la Rose.

2- What is the importance of scent upon meeting someone for the first time?

3- Do you think that there are typically feminine or masculine scents?

I often asked myself that question and the answer is neither a yes or a no. The concepts of femininity and masculinity are personal seeing as how what is considered feminine for one person might be masculine for another. For example, you can like musk but be very feminine and vice-versa. With Lares, it’s important not to have any preconceived notions about this or that and to take each fragrance for what it is.

4- Do your clients serve as an inspiration for new creations?

Yes but I try to maintain a certain balance between what is “feminine” and those that are masculine in order to create a fragrance that is attractive for all. On the one hand, in Cognac à la rose, there is pepper and cognac, two scents that are generally considered masculine as well as rose and vetiver which are usually found in perfumes. The combination of scents come together in a way that establishes a very interesting balance.

5- What is your opinion on fragrances that are created and sold specifically for either men or women?

I think that it’s a marketing tool. It was decided that certain scents were for women and others for men. Personally, I couldn’t care less and Les Lares is an example of that. By removing that barrier, I think that everyone would benefit from what a perfume really has to offer independently of gender.

“In ancient Rome, the lares were divinities who watched over domestic life, protectors of house and home. They moved from one generation to the next and were also called ancestors or familiar spirits.”

6- Do you think that perfumery is moving toward becoming more unisex similarly to what we are already seeing in fashion?

In my opinion, there will always be fragrances that target either women or men because it’s a part of the vision of these large companies. However, if unisex fragrances were to become trendy, I am certain that larger companies would also go that way. We see the same thing with “healthy” foods. If there’s the possibility to make a dime, companies will adjust.

7- How do you feel about people often choosing popular fragrances that are mass distributed like Coco Mademoiselle, miss Dior or Chloé by Chloe?

I think there is a disconnect between person and brand identity. The way in which companies associate a smell with the image of a beautiful woman is particularly influential. When wearing these scents you feel less like you and more like the brand and everything that is associated with it. Also, the lack of uniqueness is a bit sad. In a certain way, these fragrances can be bigger than oneself and take up a lot of space.

Just like how we dress up in disguise sometimes, perfumes can play the same role. It can be like wearing a mask for fear of being uncovered. I had hoped that people could be more in touch with themselves. For me, perfume is something very personal. It is meant to leave little trace. It is also about closeness. You have to move closer in order to smell it.

There is also the issue of not knowing what you are putting on your skin. The use of chemical ingredients in perfumes takes away from the essence of the perfume itself.

8- What kinds of fragrances would you recommend to women who like more sombre and intense scents?

I would recommend choosing a scent that has undertones of tobacco, amber, musk, leather, hay, sage, patchouli and wild carrots. Basically, it has to have rich and earthy scents. Of course, you could also go towards the more “heavily floral” scents with tuberose, a wonderful flower. Or further still I would suggest something with notes that we consider “spicy dry”, like pepper and cardamom.

9- What steps should someone follow when choosing a new fragrance?