Category | News
With dialogue or humor, you can get through it on a daily basis. Most of the time, guys end up leaving and sometimes even wishing you a nice day. 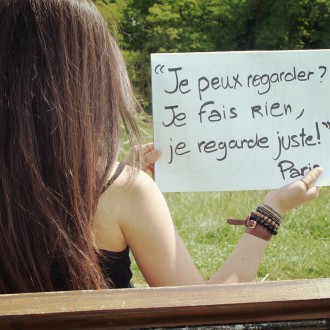 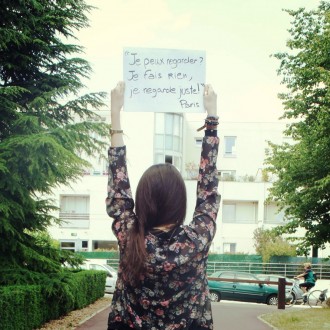 Every single woman knows about street harassment. Lesbians are surely not an exception. “Who plays the man?”, “Can I join you?”, “Stop holding hands!!”. A bunch of insults that the french creator of Lesbeton wanted to publicly denounce by creating a Tumblr. We had the pleasure of speaking with her about an interesting project that is as audacious as it is essential.

A french student in her twenties, lesbian and feminist. But before that, I am a human who deserves respect, like everyone else.

The idea comes from personal experiences. I am openly lesbian and I usually never hide who I am in the streets when I’m with a girl I like. With my ex girlfriend, we were constantly harassed, like 5 to 15 times a day. It was always unwanted remarks like: “Can I be your sex slave?” or “Can I watch?”. Once, I fell asleep on her shoulder in the TGV and at the end of the trip, a man came up to us and just said “Thanks” with a huge smile on his face.

It was humiliating. But the remarks were only a small part of our day to day. I can’t count the number of times we heard a car horn, guys screaming at us from inside his car, people following us, people who stare at us for too long, etc. I ended up not feeling well and for the first time I spoke to a close friend, about a month ago at 2 am on Facebook. He said “Talk about it, explain, fight”. And then Lesbeton was born…

3- Can lesbians around the world send you pictures/messages or is the Tumblr strictly french?

I would love for the Tumblr not to be limited to France since street bullying is an international phenomena. I try to contact medias and organisms out of France, in Quebec or in Belgium, even in Morocco, where someone recently sent me photos. I also saw on Twitter that a Swiss feminist movement had talked about it. Maybe in time I’ll get contributions from all around the world.

4- Were you ever a victim or a witness of homophobic remarks? Can you give us examples?

Yes, with my ex girlfriend in Paris. We were sitting on a bench near the Seine, tenderly talking to one another. A guy came up to us asking if we were dykes. Normally I would have said yes but for some reason I answered “No”. He stared at us for a while and then left saying: “Thank god because it’s disgusting”. In Montpellier too, in the south of France when we were coming back from the beach, waiting for the train. Two guys approached us. One engaged in what felt like a casual conversation at first. We all talked about our lives, really it was nice. And then, and it must have bothered him since the beginning, he asked: “But if you are lesbians, you’ll never feel the best sensation in the world, that of a big dick!!”

I don’t quite remember how we reacted, we might have said: “Neither do you”. Even his friend was ashamed, he told him: “You really said that?! You just CAN’T say that!”. Stories like that, there are tons in Paris, in Montpellier, in Nancy, in Strasbourg and in different contexts; while walking in the park, in public transports, etc. Most of the time, we were holding hands or hugging.

5- What advices would you give to girls who get harassed?

Everyone is different and what worked for me won’t necessarily work for others. Personally, I felt the need to talk about it and transform those negative experiences into a positive initiative. With dialogue or humor, you can get through it on a daily basis. Most of the time, guys end up leaving and sometimes even wishing you a nice day. But I understand that not everyone wants to play teacher 10 times a day, it’s exhausting. It wore me out.

6- Since you launched the Tumblr, what kind of messages do you receive?

In general, I receive messages stating that my project is great and that I should keep on doing it. Some french medias, like Yagg, Jeanne Magazine or Cheek rapidly shared the info on Facebook. The comments I receive are mainly positive and encouraging. Some people are curious about expressions I use on Lesbeton like “asexual” or “heteroflexible” or pansexual” and It’s a good thing.

A Tumblr called Paye ta shnek (PTS), a reference in France for street harassment, also shared Lesbeton on its Facebook page where it received mixed comments: a small amount of men condemned the project, saying it created divisons and that it stigmatized men. Those few bad reactions, rapidly answered by PTS and often discussed in feminist and LGBTQ debates, were quickly swept away by the majority who enjoyed the article.

7- What message do you want to transmit through your tumblr? Do you think it makes a difference?

I really hope that my blog will help women who feel concerned, whatever their sexual orientation is. I hope they will think to themselves: “I am not alone, it’s finally out there and I feel relieved”. I want them to know that they have the right to be themselves and that it is society that needs to evolve. Contributions are open to all women but the blog is for everyone, including the hetero male who thinks the project is designed to divide opinions. In reality, my project focuses on the right to respect for every human, whatever their sexual orientation, their origin, their social class or their religion is. That’s what keeps it alive: a constant desire for a more tolerant society.