Category | News
My community may be flawed—as all communities are—but it is far from feeble. We are not weak. 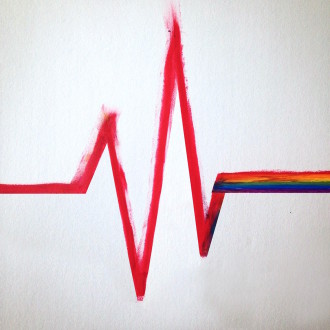 At 1:55 a.m. on Sunday, June 12, I looked into the eyes of the sweaty, sparkly strangers surrounding me in a tiny gay bar in Washington, D.C., and lifted my glass. We wished each other “Happy Pride!,” a phrase I’ve shouted out at some point, in some place, every year since my teens.

As we celebrated, our counterparts in Orlando were living out their final moments.

On June 12, between the hours of 2 and 5 in the morning, 49 people were murdered by homophobia, ripped away from their friends and family. Homophobes—even those dealing with their own internalized homophobia, as many speculate the shooter was—so often seek to annihilate what they perceive to be other, flawed, feeble.

My community may be flawed—as all communities are—but it is far from feeble. We are not weak.

Tonight’s vigil in Parc de l’espoir is about coming together to mourn. But it’s also about standing up, being seen, being counted—LGBTQ+ people and allies alike. Thoughts and prayers aren’t enough, not nearly enough.

For the past two years, I’ve been a volunteer with GRIS Montreal, a not-for-profit whose members go into local schools to give workshops that demystify homosexuality and bisexuality. Recently, the organization has started reaching out to the city’s older generations, particularly people in residences, in an effort to help the growing population of seniors integrate its LGBTQ+ members into their new surroundings. Because in Montreal in 2016, the elderly are heading back into the closet after a lifetime of fighting to be out. Because two men can still be assaulted for kissing on the street. Because children repeat words and reenact belief systems they’ve learned at home, in the schoolyard, in their neighbourhood.

Educating kids. Meeting with seniors. Having the same conversation about respect with family members over and over again. Challenging strangers, acquaintances and loved ones on the hurtful terms they employ. Holding hands with your partner in public. Congregating in a park to grieve.

Battling hatred and ignorance requires constant effort from everyone, not just the LGBTQ+ community. Allies: you are not off the hook. You must not remain silent. We are your family, your friends.

And if the demands seem too high, let us all stop and remember Stonewall. Remember Matthew Shepard. Remember Orlando. Let us remember the heartbreak, the grief and the anger—and let us be defiant.

Montréal Pride, in collaboration with Collectif Carré Rose, is holding a vigil in memory of the victims of the mass shooting at Orlando’s Pulse nightclub. The event will be held tonight, June 16, at 7 p.m. in Parc de l’espoir, 1294 Panet St.

Stéphanie Verge is a journalist based in Montreal. She is a contributing editor at LSTW.