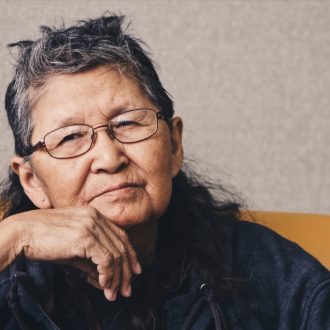 The amazing grace of a two-spirit journey

In 2016, Ma-Nee Chacaby committed her memoirs to paper—a life of hard hits that the Ojibwa-Cree grande dame has overcome with courage and resilience. The 71-year-old Anishinaabe woman’s journey has nothing of the gentle meanders of quiet days, and she looks to Gitchi Manitou, the Great Spirit, to guide her. Through everything, faith has remained the constant amazing grace that lights the remarkable two-spirit path the creator whispers in her ear, which she recounts in A Two-Spirit Journey: The Autobiography of a Lesbian Ojibwa-Cree Elder.

Ma-Nee is a storyteller. Ironically, as we sit down to talk, she confides over a cup of tea that she doesn’t relish the idea of chronicling her life. From the time she was born, on July 20, 1950, at the Fort William Indian Hospital Sanatorium in what today is the town of Thunder Bay, Ontario, Canada, she has tackled myriad obstacles. She was adopted into a white family until Leliilah, her kokum (grandmother), came for her when she was two years old. “I don’t remember very much about my childhood, but, as far back as I can recall, I never felt I belonged anywhere,” she confessed. Still, she recognizes what a tremendous influence her kokum had on her life: “She had such a way of telling stories and showing love. There’s no one like her in my life today.”

Born on the Saskatchewan prairie, Leliilah was a nomad, a storyteller and a healer. In the early 1900s, she traveled as far as Ombabika, Ontario, where she settled. When Ma-Nee was only five years old, Leliilah told her she was two-spirit, niizh manidoowag. Ma-Nee remembers being more attracted to girls from the time she was ten, but it took her decades to understand the connection between her feelings, her grandmother’s affirmation and the two spirits that live within her.

Ma-Nee was nearly 40 when she attended her very first Pride parade in Boston. She had met the first great love of her life, 22-year-old Leah, a year earlier and moved to Massachusetts to be with her. With Leah, Ma-Nee discovered sex, love, passion and mutual respect. “I had missed out on a lot, and there was no way I was going to miss out anymore!” she laughed. After their relationship ended, Ma-Nee met and fell in love with Grace. The couple lived together for 12 years in their home in Kaministiquia, Ontario.

Today, Ma-Nee is single, for lack of time and opportunities to meet people in her town. “There aren’t any gay or lesbian cafes or bars in Thunder Bay anymore,” she said. “You meet people at Pride, and that’s it! Everyone comes out once a year, and then they go back into the closet forever.” Still, she has taken part in not one but two Thunder Bay Pride weeks. She led a drum and purification ceremony and was even as an Elvis impersonator at a drag event.

Today, Ma-Nee embraces her two-spiritedness and all love she receives, but the first forty years of her life are marred by alcohol abuse and repeated sexual violence. At the age of 16, she was married off to a brutal man by her mother. Still, Ma-Nee had two beautiful children, Sarah and Martin, and a third child born of rape who died of sudden infant death syndrome. Ma-Nee eventually toppled into a life of alcohol and homelessness, and her children were taken away from her. After being pronounced clinically dead from tuberculosis and double pneumonia, she came back to life and sobriety with the support of Alcoholics Anonymous. As part of her recovery, she made the commitment to help others as an addiction counsellor for members of First Nations communities. She also works to aid homeless pregnant mothers struggling with substance use, AIDS patients and the many foster children she has taken in over the years.

Ma-Nee Chacaby’s extraordinarily candid autobiography is among the rare accounts of a two-spirited life. Written in the first person by an Anishinaabe lesbian and bearing witness to the issues faced by so many Indigenous communities across Canada, the book is a testament to the paramountcy of oral tradition. Ma-Nee is a raconteuse whose unique perspectives reveal how colonialism, racism, homophobia, violence, addiction and poverty continue to shape Indigenous women’s lives.

One day, as a young Ma-Nee was trapping with her father, the children of Ombabika were taken from their families and sent to live in a residential school. Was she lucky to be spared? “Many of those children were abused, but I was, too, in Ombabika,” she said.

Still, wise Ma-Nee Chacaby continues to turn to Gitchi Manitou, who gives her a reason to live and create art: “He gives me hope. I’m guided by love. Love conquers all. I don’t believe in anything but love. I can’t hate people for what they do to the planet, even though there are plenty of reasons to despise them. I don’t want to live in a world of hatred and violence. There’s definitely something greater than ourselves, and all you have to do is believe. That belief is what saved me.”