Category | Sponsored
I grew up at a time when homosexuality was still considered a mental illness and a crime in Canada.

I was 32 when I went to my first Pride parade. It was 1995 and I was living in Montreal at a time when the AIDS epidemic was taking so many beautiful men away from us and cutting so many lives short.

At that time, I lost someone dear to me each month, including my best friend René, who passed away in 1995.

With René’s death fresh in my heart, I decided to attend the Pride parade. AIDS was constantly on the news, and just like the COVID-19 pandemic, everyone was grappling with a lot of fear, confusion, and grief. And just as people are struggling to understand COVID-19 today, back then misinformation about AIDS was rampant, and many were afraid of contraction.

In order to spread a message of resiliency and hope, my friends and I decided to be in the Montreal parade that year. We rented a hearse, and two of my girlfriends dressed as angels with wings sat on the hood of the car. A DJ blasted music out of the back and we placed speakers on the roof of the vehicle with the words ‘IT’S NOT OVER’ painted all over it.

As we drove along, people didn’t know whether to clap or to cry, but there were also smiles as they read the slogan, taking in the message.

That parade will forever be one of the most memorable moments of my life.

That first event showed me that Pride is about so much more than a parade. It’s about marking a moment in time, celebrating how far we’ve come as a community while acknowledging and collectively understanding that the fight for greater equality was far from over.

Each year, Pride is a little different, situated as it is in a moment in time. With so many Pride festivities canceled this year as a result of COVID-19, it’s even more important to recognize Pride as a time for not just celebration, but reflection and re-focusing.

Homosexuality as a crime in Canada

I grew up at a time when homosexuality was still considered a mental illness and a crime in Canada. My mother was very uncomfortable with my sexual orientation. The word ‘homophobia’ didn’t exist.

When I was 19 years old, I enlisted in the Canadian Armed Forces because I wanted to serve my country—even if I wasn’t recognized by society for my whole self. Before long, I had a rewarding military career and I was proud of the work I was doing.

Until one day in 1984 when members of the Canadian Forces Special Investigations Unit arrested and interrogated me and forced me to admit to my ‘perversions’ – their word for my sexual orientation. I was eventually discharged after being labeled a deviant. This caused severe emotional trauma in me that continues to this day and the process I underwent (along with others that served) was part of a campaign that came to be known as the “LGBT Purge.” The campaign was a dark period of systemic discrimination in the Armed Forces that the Canadian Government would eventually apologize for in 2017. This discrimination created constant anxiety in me that I could not be my authentic self.

In 1999, fifteen years after my discharge, things had slowly started to shift for the LGBTQ2+ community in Canada. The conversation around same-sex marriage was gaining momentum, and corporate Canada was beginning to embrace the LGBTQ2+ movement.

I was working in New Brunswick at the time and had helped to found Pride at Work Canada. This organization – of which TD is a founding member – empowers Canadian employers to build workplaces that celebrate all employees, regardless of gender expression, race, gender identity, or sexual orientation. Our vision is that all individuals can achieve their full potential at work.

My work with Pride at Work Canada led to another significant Pride parade celebration in my journey when in 2002, I felt so comfortable being recognized for who I was at work that I helped organize the first-ever Pride parade in Saint-John, New Brunswick with the full support of my employers.

Although only about 50 people showed up to this parade and it was significantly smaller than my first event all those years ago in Montreal, it was no less important.

Once again, the parade was more about the moment in time. You could feel that incremental changes were happening in Canada (in 2005 for example, TD was the first major bank in Canada to sponsor a Pride parade) and we had corporate sponsors, which meant the world to us. Like every Pride event, we gathered to celebrate who we were and for the little gains, we were making in society. 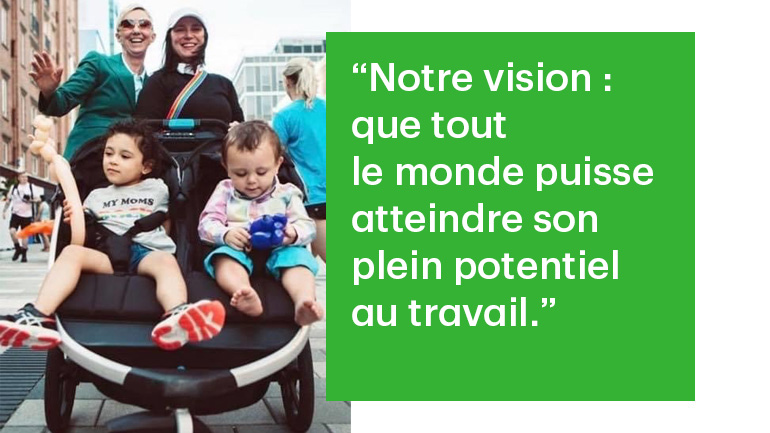 Pride is a year-round event

Pride feels a little different each year, and this year will certainly be no exception.

Across Canada, the COVID-19 pandemic is forcing authorities to introduce physical distancing and other public health measures, which have resulted in the scaling back or cancellation of many Pride events.

In my role as a Regional Manager Business Development LGBTQ2+ Quebec and Eastern Canada at TD, I work closely with LGBTQ2+ business owners throughout the communities we serve, and I know how important Pride is to their businesses and communities.

The parades and the celebrations are significant, I also know that Pride is about more than a parade. It’s about awareness and celebrating who we are 365 days a year because discrimination still exists. It’s about acknowledging that there’s still work that needs to be done.

For me, the true meaning of Pride is something I feel every time I am with my children or my partner, who I can now legally call a spouse, and when I think about the apology we former members of the military received as a result of the LGBT Purge.

This year’s Pride will be remembered as the one that was affected by COVID-19, but I encourage everyone to embrace the moment and make this year’s celebration about more than a parade. Make it about recognizing what we are collectively experiencing. Make it about listening to marginalized voices, and about learning about how you can help.

And while I hold that memory of a younger me driving through my first parade during another unprecedented time close to my heart and wish we could congregate now—I’d encourage us all to be proud of the accomplishments I’ve just listed and to look forward to others, without taking anything for granted.

And just as I painted on that hearse in Montreal all those years ago—it’s not over.