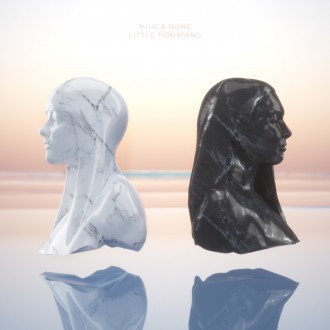 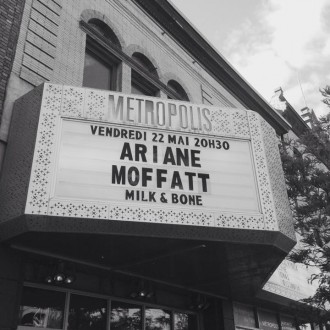 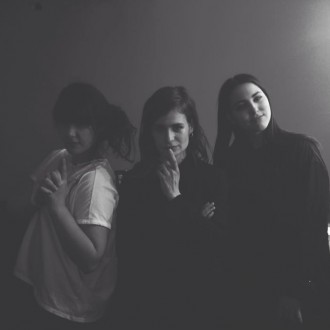 Phone interview. I’m reaching out to Camille Poliquin, the younger half of a duo she forms with Laurence Lafond-Beaulne. Friday afternoon. A good time to listen to their newest creation, an album called Little Mourning, out on March 17th when more than 2000 people are expected to gather in the beautiful Centre PHI for the launch. Everyone agrees; the two girls are on a fast rise, pushed forward by a great campaign on social media and a solid team of collaborators.

Many articles surfaced in the last few months about the fresh phenomenon. Camille and Laurence firs met in Cegep Saint-Laurent, in the music program. No classes together since Laurence is a year older; they form their friendship slowly around spontaneous conversations. A friendship that truly evolves when they both embark on David Giguère’s tour. Somewhere between Montreal and Sept-Iles.

Laurence is the bassist while Camille sings and plays the keyboard. Milk and Bone was born trough Mister Vallaire, a well-known band from Sherbrooke, who asked the girls to be lead vocals on “Known by sight” a collaboration that sealed the girls’ destiny.

“Milk” for Camille, “Bone” for Laurence. “A name originally created for Misteur Valaire” says Camille, still in awe of how things went fast. It’s in a peaceful place, far from the city, that the band started creating only with the essentials. They surfaced with what we know now as “New York” a song they recorded with producer and friend Gabriel Gagnon, whom they met trough David Giguère.

According to Camille, “David is a bit like my mentor on everything live in quebec. He showed me the business side of things and taught me how to create an album concept from a to z.” The creative aspect comes from the girl’s everyday struggles and joys.

“My writing comes from my emotions and Laurence too. We really are on the same page when it comes to the sound we wanna give our songs” adds Camille.

Milk and Bone bathes in electro pop, with inspirations from Bjork, Lykke Li, Beach House and many others. Little Mourning took a year to fabricate, slowly from start to finish. Written by the girls, produced by Gabriel Gagnon. Camille’s favourite track? Watch. and Laurence’s? Pressure.

“Laurence is a big fan of hip hop and she really wanted a featuring on Tomodachi.” says Camille when asked about Terrell Morris.

She adds, with a smile in her voice: “He was so tight. We sent him the song and on the same day he sent back what is now featured on the album.”

What does Milk and Bone dream about? “We dream about traveling the world with music, we hope that everything runs smoothly at SXSW at the end of March and we dream about meeting more and more people for future collabs.”

Little Mourning is out on March 17th, on Bonsound records..
The girls will be opening for Ariane Moffat in May. Want more?
Camille Poliquin has a solo act called KROY and will be performing at Théatre Lachappelle in July.