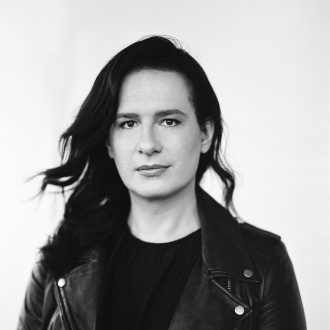 Photography by Gaëlle Leroyer
Hair and Makeup by Maïna Militza

You could call me a late bloomer. It took me forty years to have the courage to admit that I am a trans woman.

Why did it take me so long to muster up enough strength to begin my medical transition? The usual fears of disappointing my loved ones, of being marginalized, of endangering my health and safety certainly played their part.

But my work environment played an even bigger role in holding me back. I started my career as a cultural journalist at a time when most editors matched the archetype of the wise-cracking mansplainer. I tried really hard to be that guy. Even as something deep in me was longing to have a voice.

I convinced myself that transitioning would mean career sabotage. So for the longest time, I delayed the inevitable.

Life has its ways of upsetting the worst laid plans. After many years working as a chief editor I was let go. In hindsight, that was a blessing.

Getting fired presented me with the opportunity to reinvent myself. This was the time to listen to that nagging inner voice. Changing industries would give me the impetus to change everything else in my life.

And so, I went into advertising. Creative agencies can be a wonderful refuge to people who stand out. On my first day as a newly minted ad-person, I was impressed by the crackling energy, the laid back attitude. Every one looked busy but also very free. Individuality was celebrated.

I began to dress in a more feminine manner. Six months in, I was dressing as a woman almost daily. I had found more freedom that I could have ever dreamed of.

But advertising can be a boys’ club. And boys clubs, no matter how open minded they might appear, see the world through boy eyes. I was accepted, but not understood. To them, I was still a man in heels.

Ultimately, I was let go again. Perhaps because it’s impossible to do your best work when you are not your best self.

The power of paying attention
A year later, I was hired by Cossette, one of Canada’s leading agencies as a Creative Director.

One of the most powerful moments of my professional life is when my C.E.O, Mélanie Dunn turned to me, minutes before an important client pitch, and said: “I’m going to present you as a woman, that’s what I see when I look at you. That’s what you are”. Six months later I was starting hormones. I was finally safe.

That is the most hard-hitting management lesson I have received. The mark of a great leader is their ability to notice, to truly see their team members and find the right words to say : “You matter. I understand what you strive for, and, if I can, I’ll help”.

I’ve worked hard to succeed, But I was incredibly lucky. I am fully aware that part of my success rests on my past privilege as a man. The other part rests on the kindness of others.

When I flounder, and I often do, when the physical and mental pressures of transition are too heavy, I’m expected by my colleagues to take a break.

Case in point: right after coming back from a three-month leave due to exhaustion, I was promoted from Creative Director to Vice-President. Other agencies would not have stuck with me, even less given me a promotion. Conventionally, I’m too fragile, too much trouble, too much of a risk.

To people like me business is intensely personal. With time, my colleagues have become my chosen family.

By providing me with a safe space, my colleagues and employers has benefitted from all the strength I had previously spent fighting against myself and others in my quest to be recognized as a woman. Today I use that considerable amount of energy to solve creative problems for my clients, to push my team forward and to help build the agency of tomorrow.

Work with your chosen family.