Category | Arts & Culture
Astrology can help people understand themselves and learn what kind of life they want to live.

Astrology can offer answers  to those in search of meaning. For queer folks, it can also be a tool of resistance and resilience.

“Everyone has to say their sun, moon and rising signs,” demanded the woman throwing the party. A group of about  10 people—most of us queer and in our 20s—had gathered on her balcony for a casual mid-summer get-together. Sitting  in a circle, we proceeded to describe our celestial makeups.  When my turn arrived, I was prepared. I’d witnessed this conversation at nearly every gathering—none of which were astrology-themed—that I’d attended in recent months and  had figured it was best to memorize part of my chart. “I’m a Gemini,” I started, “with a moon in Scorpio and a—” “Oooo,” cooed a woman with a buzz cut and a choker, cutting me off. “That makes sooo much sense for a journalist.”

It’s fair to say astrology is having a moment. Over the past few years,  the Internet has enabled the growth  of celebrity astrologers, allowing them to build loyal followings online. The undisputed queen is Susan Miller, who has been profiled in Vogue and Vanity Fair, and who reaches 6.5 million people worldwide with the monthly horoscopes she writes for her site, Astrologyzone.com.

General surveys show that astrology has gained mainstream popularity south of the border. Data compiled by the National Science Foundation in 2014 found that nearly half of Americans think astrology is “very scientific” or “sort of scientific”— and the percentage of people who felt astrology was “not at all scientific”  was the lowest it had been since 1983.

Information about the number of LGBTQ+ folks who believe in astrology is, unsurprisingly, hard to come by. Still, there seems to be a demand for  a queered version of the practice. In  the United States, the biennial Queer Astrology Conference, launched in 2013 and committed to “interrupting hetero-normativity one galaxy at a time,” attracts participants interested in talks on such subjects as astrological archetypes and creating a star chart built around the AIDS epidemic.

For younger queers, this new  wave of astrology is nothing like the heteronormative baby-what’s-your-sign compatibility trope. They are claiming the practice for themselves, using it  as a tool for community building, self-reflection and healing.

Shaunga Tagore, 33, has been working professionally as an astrologer in Toronto since 2013. She reads birth charts, which she believes can offer her clients an opportunity to look inward. “I describe it as intuitive counselling,” she says. “Astrology can help people understand themselves and learn what kind of life they want to live.”

Someone who is shy but feels pressured to be social, for example, may be relieved to find multiple earth signs—commonly considered grounded homebodies—in their chart. When clients see characteristics they’re insecure about reflected as an essential part of their identity, Tagore says, it can be validating. She believes this affirmation is important for everyone, but particularly those whose gender identities or sexualities fall outside the norm. “Just by virtue of being queer many of us have experienced what it’s like to not be allowed to be ourselves,” she says. “I’m an advocate of anything that helps us know who we are.” 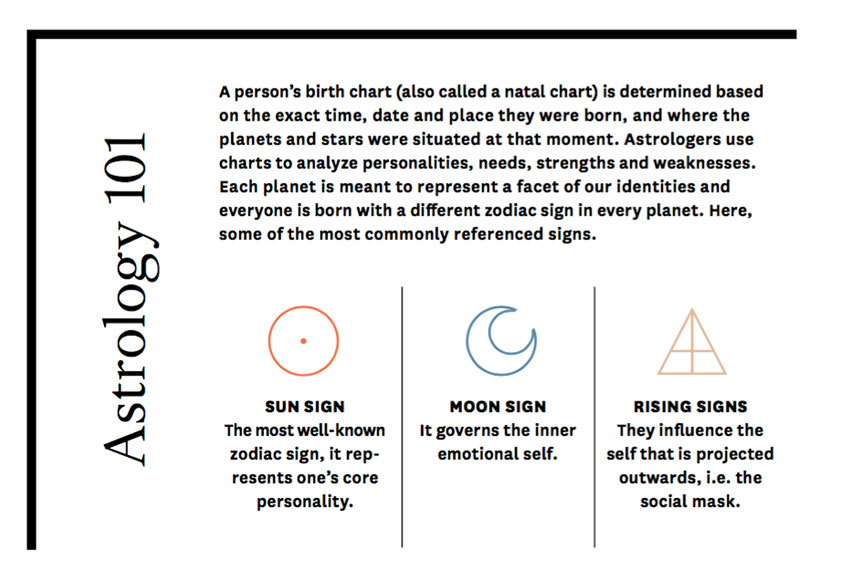 By giving participants a nuanced way to think about their identities, astrology can be particularly useful to queer kids, or others who have recently come out. In 2016, Montreal astrologer Mars Gravida taught workshops at Camp Ten Oaks, which caters to youth ages eight to 18 from queer and trans families and identities. Gravida has observed how astrology can assist children in accessing community in a way that’s light and fun. Through the movements and positions of celestial objects, LGBTQ+ participants can see their personalities, drives and desires as multi-faceted, rather than having to simply slot themselves into one of the five common letters of the acronym— an act that can be intimidating.

“Astrology is a lot less politically charged than labelling,” Gravida says. “It still has a lot of depth to it, but there’s much less stigma or consequence.”

The subtleties astrology offers can be equally validating when it comes to navigating romantic attraction. Montrealer Sydney Sheedy became curious about the practice when she noticed other queer folks were increasingly well-versed in it. She was interested in applying it to her love life, and was fascinated when friends analyzed her birth chart at parties. “When it comes to sexuality, astrology gives me words to use that are outside of clichéd language,” she says.

Instead of relying on reductive terms such as “soft butch” or “hard femme” to describe what she’s looking for, Sheedy uses astrology to talk about love or attraction in a way that’s less focused on outward appearances.  (As a Sagittarius, she gets along well with other fire signs, for example, who tend to prioritize similar things in a relationship, such as excitement and forward movement.)

Astrology has also allowed Sheedy to feel more embedded in the queer community. In social situations, it acts as an icebreaker, and makes forging connections less daunting.

Strong queer communities are sites  of resistance and astrology can help  us determine our roles. Studying the ways we’re shaped by the cosmos is  an exercise in self-reflection. Taking  an honest look at our strengths, weaknesses, needs and limits can  help queer folks determine how we  can contribute to the communities  we build—whether our personalities place us at the front lines or behind the scenes—and to feel empowered doing it.

“So many of us are dreaming and fighting for a better world,” Tagore says. “I don’t think we can actually make that happen unless we are actively looking at ourselves—what we want out of life, our values and our beliefs.”