Category | Sex & Relationships
Today however, there is much more dialogue in both the media and society about the clitoris, but not however in the medical world. There are still far too few scientific studies regarding the clitoris. 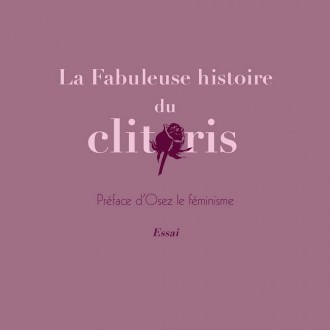 Did you know that a hyena’s clitoris is as large as a penis and that it can become erect? But what about the human clitoris? To find out more, we spoke with Jean-Claude Piquard, author of La Fabuleuse Histoire du Clitoris. He was kind enough to answer our questions with no holds barred.

1- Is it accurate to say that the clitoris can become as erect as the penis?

Well, although the process of becoming erect is identical, the clitoral erection is generally more moderate. The gland and the body that support the gland, are erectile. The average size of an erect clitoris is eight millimeters. A little known fact about erections is that during the period in which the clitoris is erect, the arterial blood flows to the vascular spaces known as vestibular bulbs which are a part of the clitoris and surround the vagina (situated under the lips). The engorgement allows for the opening of the vulva, which is more or less pronounced depending on the individual.

2- What is the average size of a clitoris?

When in a state of non arousal, the visible part of the clitoris (the glands) is similar in size to a pink bud, between three and four millimeters. For some, it can be barely visible. Conversely, it can measure up to one centimeter! These are known anatomical differences. Hypertrophy is rare but when the clitoris measures a few centimeters, it actually does resemble a small penis! The erection is thereby noticeable because of how upright it can become. For your information, between the 16th century and the end of the 19th century, clitoral hypertrophy was called clitorism.

The word disappeared in the 20th century along with the word clitoris which Freud considered to be an infantile word (in the 1960s, the word clitoris itself completely disappeared from dictionaries). Clitorism was initially characterized by being larger than the little finger! In ancient texts, it was something that inspired fear, fear of the phallic woman. I’ve often seen the phrase in articles on human anatomy “le clitorisme est le mépris de l’homme”. Doctors once treated this condition by excision…

3- What causes the clitoris to become erect? Are there techniques or infallible tricks?

Similarly to the male erection, the clitoral erection can be a spontaneous reaction, a response to sexual desire or a reflex in response to direct (mechanical) stimulation of the clitoris. These two types of erections are enjoyable and often occur in conjunction with each other. Furthermore, as is the case with men, the female erection does diminish with age. Whereas men prefer a more vigorous stimulation, women require somewhat more gentle, constant and pulsating motions, light and quick.

Unlike men, you shouldn’t increase the stimulation during climax but rather maintain it. If it is too strong, it can quickly become painful. Actually, there are many nerve endings in the clitoral gland and as it is small, these ending are not only dense but also very sensitive which can lead to discomfort when overly stimulated.

4- What should not be done in order to avoid causing one’s partner to lose their state of arousal? Or rather, how does one avoid not achieving a clitoral erection?

Often during consultations, women complain about partners who try to stimulate their clitorises too early. In this particular situation, there is no spontaneous erection due to arousal. The clitoris requires stimulation, one that is perhaps slower and more attentive in the beginning allowing an erection to occur. Sometimes, clitoral stimulation can be premature and the woman may need to be more aroused before her magic button is ready. Other women speak about having ticklish clitorises.

Once again, if there is premature stimulation of the clitoris, without there having been a spontaneous erection or one caused sexual desire, the sensation can be unpleasant. And sometimes, the vulva needs to become accustomed to contact: start by gently and intimately caressing all of the vulva.

5- Is it also possible for a woman to experience an inability to become aroused? In other words, can a woman not achieve a clitoral erection?


Throughout a woman’s life, the clitoris can lose sensitivity for a period of weeks. This isn’t necessarily serious, it might be because of fatigue, sickness or medication, a broken heart, mourning…If the situation lasts more than a few months, it would be best to consult a physician, the main cause often being hormonal (related to estrogen) which can often be easily solved.

6- Can a woman become sexually aroused and get wet without having a clitoral erection?

Probably, but there is no scientific research on the subject! Sexual arousal triggered in the brain increases the blood flow to the genital area causing the vagina to become lubricated. Some even speak of an erection of the vagina as it does swell due to the increased blood flow to that area when aroused. Actually, it is the same nervous system (parasympathetic) that controls blood flow to both the vagina and clitoris, hence why it is very possible that they are somewhat synchronized. That being said, there are differences: each woman has their own sexual rhythm that may vary based on circumstance.

7- Why is it then that even today we do not hear very much talk, if any at all, about clitoral erections?

You’re right, we don’t hear much discussion about the clitoris. This is the aftermath of the clitoral obscurantism of the 20th century which ultimately peaked in the early 1960s. Surprising no? This is actually the premise of my book which is entitled La Fabuleuse Histoire du Clitoris. Today however, there is much more dialogue in both the media and society about the clitoris, but not however in the medical world. There are still far too few scientific studies regarding the clitoris. And more surprisingly yet is the fact that the medical field is contributing to the circulation of somewhat doubtful and controversial information about the sensitivity of the vestibular bulbs that play a role in vaginal orgasms…This is the theme behind my next book. More to come…