Category | One on One/ Interviews
« Altogether the idea is to have a tour that is different from what’s already out there, in an area that is booming. We want to offer a unique and authentic experience, embedded in local culture. » 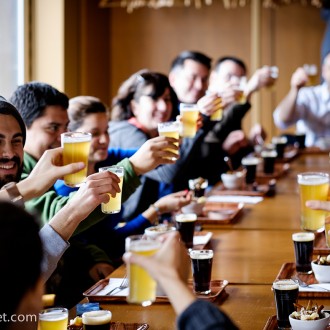 Spade & Palacio is a young organization created by two Montrealers passionate about Montreal and tourism. A few weeks ago, we had the pleasure to do the food tour “Beyond the Market”.

1- Why did you decide to start Spade & Palacio?

I had the idea for a while; I wanted to do my own thing and to manage it the way I wanted. I also love to travel and as a result I always postponed the project.
It was only after an unexpected and early return to Montreal after traveling to Vietnam that I decided to act upon it. Danny and I had talked about it before and after a few nights at the Brasserie Harricana and some in depth discussions, we decided to go all in. I presented him my idea of the food tour, he came up with the name « Beyond the Market ». We were still unsure by what name we would go by, it always came back to Spade & Palacio.

In the winter of 2014 I found myself travelling through Southeast Asia and somewhere around mid-April, after a couple of days in rural Cambodia with no electricity, there was a short message in my inbox from Danny who was in Australia, and it was right to the point: “I have a bike for you and a bed. Plus my roommates are lesbians. Come say hi!”. He had me at bike. I booked a flight to Melbourne and a few days later we were riding the streets calling ourselves the Spade & Palacio Cycle Club. The Cycle Club joke turned into our business name, Spade & Palacio Tours.

2- Can you explain the concept of « Beyond the Market »?

Having a few years experience as a tour guide it became obvious that visitors saw the market but not the surrounding districts, perhaps only Little Italy. We wanted to exploit these unknown parts.

We built the tour around a few staples; the market was one, as was the picnic-in-the-park experience. As I was working on a preliminary version of what would become our food tour, I heard that Dispatch Coffee was opening on Saint-Zotique West and that they would also start roasting their own beans. A few months later Brasserie Harricana opened up and sort of became my second living room. We had something!

Altogether the idea is to have a tour that is different from what’s already out there, in an area that is booming. We want to offer a unique and authentic experience, embedded in local culture.
The businesses we visit on our tour are places we as locals frequent a regular basis and because of this we have developed a unique bond with the entrepreneurs and their staff, we’re so grateful.

I studied to become a high school teacher but things didn’t go as planned. I hated the idea of staying inside when it’s warm and sunny outside and stuck here during wintertime.
I worked as a tour leader for many years and it is after spending a few springs on the road between New York, Chicago and Montreal that I developed a passion for guiding. Getting paid to share my love for a city to visitors seemed like an excellent new plan.

I applied to do the guiding course at ITHQ, was accepted and that’s where I met Danny, the Spade in Spade & Palacio!

4- Could you define the foodie scene in Montréal?

With over 6500 restaurants in the city, Montreal sure is a foodie destination. Thanks to the creativity of young chefs, but also because of the diversity of cuisines.

I love to being able to go to the market in the morning, grab freshly harvested fruit and vegetables, then have a Bún bò Hue for lunch at my favourite Vietnamese restaurant and wrap up the day with a Pakistani dinner in Parc-Ex.

I admire the fact that many local chefs make the choice to use local produce which is both sustainable and tastier!

Danny is definitely an inspiration. Many of my friends also are. I feel very grateful to be surrounded many bright and amazingly talented people. They are my daily inspiration.

6- What can we expect from « Spade&Palacio » in the future?

New tours! Not necessarily food tours, « Beyond the Village » is coming up this summer. We are working on a collaboration with Montréal Pride. Follow us on Facebook for more info!

7- If you could have any famous lesbian on your food tour…who would it be?

Ha! If only Anthony Bourdain was a lesbian…

I just Googled « famous lesbians ». Unfortunately it didn’t help much. But Jane Lynch is apparently coming to Montreal for Just for Laughs. Jane, if you would like to discover Montreal with Spade&Palacio, we’ll be very happy to have you on our Beyond the Market food tour!