Category | Happenings
Our programming includes fiction movies, documentaries, shorts and web series from around the world. 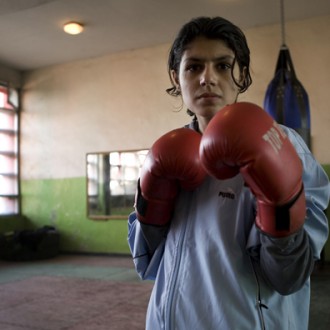 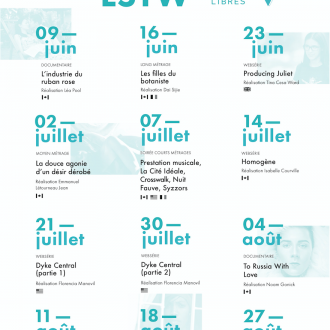 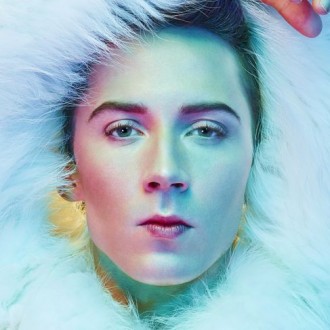 When the infamous “Boules Roses” are put up in Montreal’s gay Village, we can finally say summer is here! The Aires Libres Festival transforms Sainte-Catherine street with its pedestrian precinct.

It’s with great pleasure that we are unveiling our programming for this year’s Soirées Ciné en pleins air, as part of the Aires Libres Festival, along with all the other not to be missed activities presented during the festival.

Our programming au féminin includes fiction movies, documentaries, shorts and web series from around the world. Our desire is to invite women from the community to rediscover the Village this summer.

Here are three titles to give you a glimpse.

This year, we are presenting the amazing documentary by Léa Pool (Maman est chez le coiffeur, Lost and Delirious): Pink Ribbon, inc. that explores the big machine behind the various campaigns and fund raising for breast cancer. The documentary, who received its load of critics for portraying a very sensitive subject, puts serious doubts on the real intentions behind those campaigns. Without questioning the good intentions of many of the organisations, Pool instead puts a light on the hypocrisy of certain companies when it comes to funding breast cancer.

Companies that sometimes fabricate potentially cancerous products, to say the least. She asks questions on, for example, the use of funds. Pool did her research interviewing cancer specialists, people participating in charitable activities or meeting with woman who are living with breast cancer for a solid and eye opening documentary.

Then, we have a Montreal production called La douce agonie d’un désir dérobé. It goes like this: Over dinner, Alexa, Catherine, Manue and Marie decide that each of them must share her deepest secret. What seems easy at first takes an unexpected turn. It’s a pleasure to rediscover Alexa-Jeanne Dubé, Alex in Féminin/Féminin playing alongside Catherine B-P who is slowly tracing her way into Quebec’s television scene.

It’s impossible to say more without revealing too much of the storyline; the movie, produced by Emmanuel Létourneau Jean and Alexandre Prieur Grenier was presented at the Rendez-Vous du Cinéma Québécois.

On a totally different subject, To Russia With Love follows several people – including figure skater Johnny Weir, Olympic speedskater Anastasia Bucsis (long time girlfriend of openly gay hockey player Charline Labonté who came out on our platform) and Russian activist Konstantin Yablotskiy – as they prepare for the Olympics and blaze their own trail of activism in hopes of helping and inspiring LGBT Russians. “My hope is that people will go into the film with an open mind and leave with an open heart,” Johnny Weir told Outsports. “I wanted to hear from the activists who protested my speeches and the athletes who were going to Russia.

I want people to remember why they were so upset last summer. We have the attention spans of fruit flies. I went into the project with an open mind because I wanted to hear all of this. I left the production with an open heart. I’m much more compelled to support activism and waving flags and punching fists now.” To Russia With Love is directed by Noam Gonick, a Canadian filmmaker and features athletes from around the world, giving the film a more internationally humanistic perspective.

Aires Libres is an annual public art event which unfolds from May to September on Ste-Catherine Street’s pedestrian walkway between St-Hubert and Papineau. This year’s participating artists were invited to reflect on the notion of empathy at the intersection of their respective approaches. “Politics of Empathy” probes the implications of our capacity to project ourselves in the emotive experience, and broadly, the cognitive experience, of the Other.