Category | The Woman Power
There is a lot of unlearning that needs to be done with people at large in the city. We have to keep taking back the spaces that are ours.

Tati Au Miel (a.k.a. Tania Daniel) is a Montreal-based DJ and designer and a true force within the local queer community. They started designing stuff in 2015 first for themselves, and then for their friends. We recently met at a restaurant in the Mile-End neighbourhood to discuss art, identity, friends-as-family and fake allies.

You are a designer and you are also a DJ. Do you approach these two disciplines the same way?

I feel like anyone who works in fashion always ends up doing music, because it’s so linked. Both of them are expressions. I can’t separate them in my head. I’m so obsessed with sounds. From a baby crying to the whir of a washing machine. I’m interested in anything. My style of music is often experimental and industrial. Not your regular stuff!

How do these disciplines connect with your identity?

I identify as gender fluid (and use they/them pronouns), so for me it’s just part of my fluidity to be able to navigate both mediums. I feel like both feminine and masculine energies are in me, and I think that everyone has that too. They are just very present in me—I have been blessed. I always try to present myself as androgynous, sometimes non-gendered, but I don’t care. I’m as feminine as masculine, and anyone who knows me would know that. I’ve reached a point in my life where I’m so much comfortable.

The art of not giving a fuck anymore?
Yes, exactly!

The clothes that you create are full of different textures, shapes and colors. I find it very interesting since there’s a lot of deconstruction in them. How does this pluralism reflect the kind of artist that you are and the message that you want to convey?

I’m really into deconstructed, non-binary clothing. When someone will encounter my stuff—my clothes or me playing at a DJ set—the first thing they’ll notice is the difference. The difference in the sound or in the clothing. It’s a reflection of me, because I stand out. I like to present myself as different but not in a pretentious way. It’s just that I’m living my truth and my truth is not everybody else’s truth. To get on the level I am now, I had to do so much unlearning and healing; 2018 has been quite a year so far. I’ve been through a lot, spiritually, mentally and physically, in order to be at peace with myself. There were so many things that were happening and troubling me. People are going to project a lot of things on you, especially when you’re unconventional. It got to me. Now, I’ve reached a point where I’ve purged that ugly energy and made peace with that.

Speaking of ugly energy… At this year’s Montreal International Jazz fest, there was a big controversy regarding SLĀV, a play based on slave songs from the South presented at the Théâtre du Nouveau Monde (TNM). You were among the hundreds of people who gathered outside the TNM every day to oppose the play. In your opinion, what is the social responsibility of artists nowadays? Should they have one?

Being the type of artist that I am—non-binary, queer, gender fluid, Black—this is part of what I have to do. I have to be vocal about those things because I come from such a marginalized community and scene. I had to go to the protest, speak with the people. I’m glad the play has been cancelled but I had to put in the work for that. For an artist to not be involved with that, for me, it just shows what your intentions are. You don’t really care about the art, you don’t really care about the growth of the art—you just want your money and the clout. For me, you aren’t a real artist if you aren’t speaking about those things. Life isn’t just beautiful.

There is a lot of unlearning that needs to be done with people at large in the city. We have to keep taking back the spaces that are ours. Shout out to all of those profiting from Black culture in their art without saying things about those situations. I see y’all. The SLĀV saga was clearly racist and very traumatizing. I was like, “Is this my city?”

In your opinion, how do we create safe spaces for queer people of colour in the local scene?

I’ve noticed that whenever I get booked, it’s always a queer or person of colour who booked me. Never a cisgendered white person. The way to create safer spaces for us is by creating them ourselves. The others communities aren’t really here for us. Even if they are, it’s fake, for money or for any other kind of profit. It’s scary. Honestly, if you’re going to book a queer or transgender person, don’t fucking misgender them. I always hear about that. If you want to book them, do it the right way, respect them, do some researches. Hold the space for them. Don’t try to profit off that community.

As a non-binary person of colour, how do you navigate Montreal’s artistic scene?

It used to be hard, but now I’m so good with myself—I know my worth, my values. I know myself and I know my community. It’s not hard for me anymore because I’m very vocal and I’m always there for my people. Often, people are going to mask themselves as allies but it’s really scary because whenever you have a real conversation with them, the mask comes off. Fake allies. These things always happen to me because I’m the clash. I’m this Black-ass, bald, gender-fluid person, so if you’re racist or transphobic or both, I’m the clash. 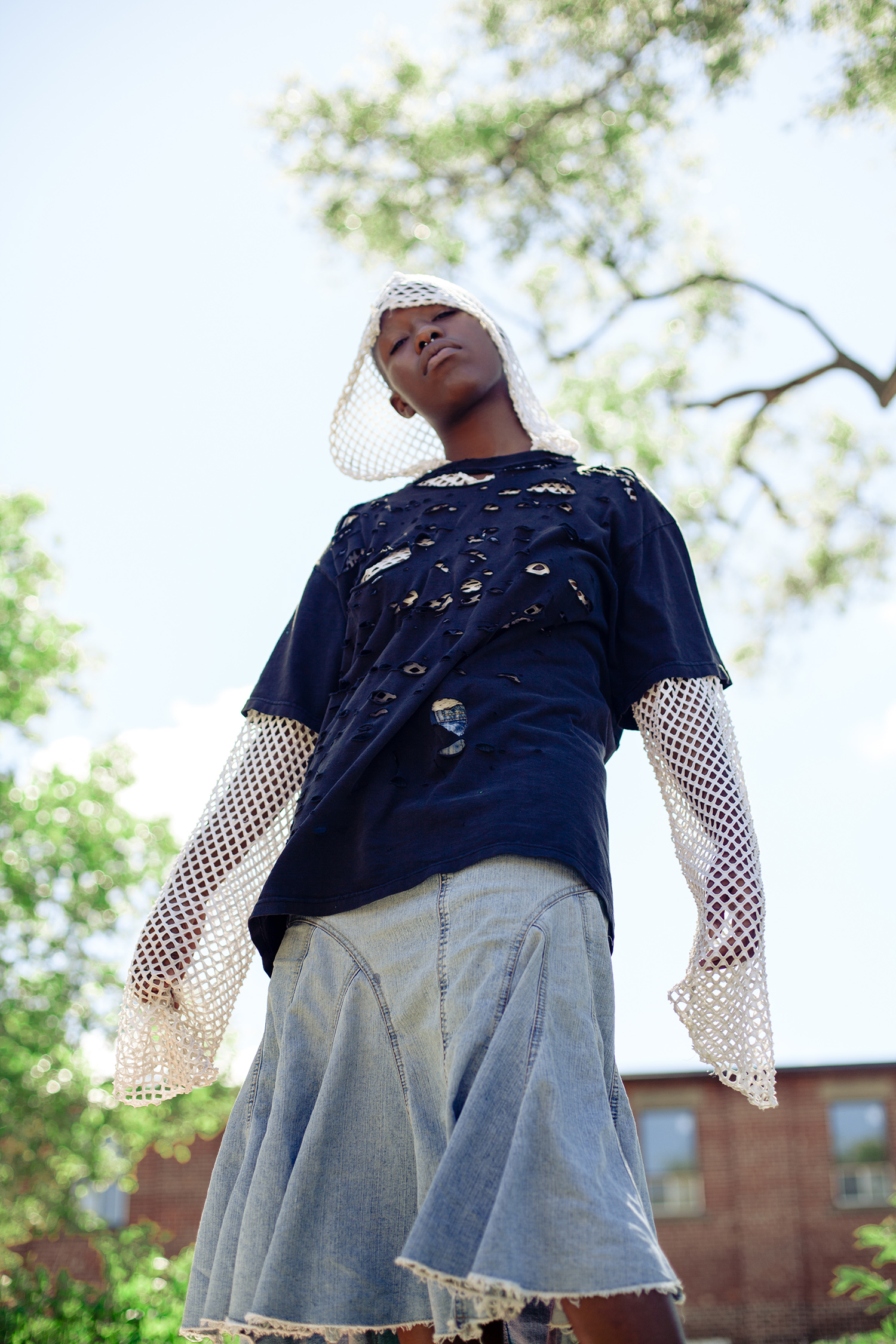 When I see you at events you are often surrounded by the same group of people. I think that says a lot. How important are relationships to you?

’Til I die! They are truly my family. I come from a rough background: a lot of mistreatments, not being valued by my family at all. My family doesn’t respect me, they don’t respect the way I present myself, my truth, my gender, they don’t even understand. In fact, they aren’t trying to understand. They just keep saying problematic things. Honestly, that’s sad but it’s a reality that many other queer children live. So many people I’ve met come from backgrounds similar to mine. We are marginalized and then we just come together. We create our own chosen family. The people who I call my friends are fucking family to me. They are unlearning as well, they are caring, listening, doing the work for themselves. It’s such a beautiful and inspiring thing; it happened naturally. I love meeting new people, and I love to talk and talk shit, so I also have lots of friends in other cities. They are queer and we all share similar backgrounds. This culture is real.

Do you believe in art as an “agent” of social change?

Coming from this marginalized place, I want to reflect that in my art. I want it to help, I want it to be part of a social change and I want it to be progressive. For example, because my art being so different, so unconventional and experimental, it makes people think. That’s part of the change. Because people are so used to not thinking. I’m all about forward thinking. I want to cause a shift and a change with my art.

A journalism graduate, Marie-Ange Zibi has been working in culture in Quebec for more than six years. Passionate about all forms of art, she uses writing to shine a light on issues that shape today’s society.

In collaboration with The Woman Power

The Woman Power is a positive platform where women are respected and valued. “Through creative content online and offline, we want to inspire women to embrace their self-empowerment.”