Category | Arts & Culture
I scrapped the army plan and went straight to being a lesbian. 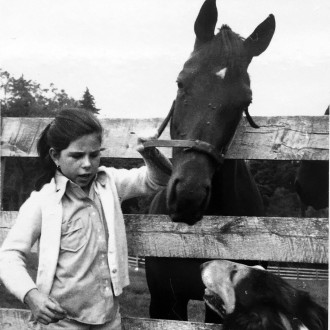 I recently wandered into a clothing shop in Toronto filled with oversized T-shirts arranged like art installations, hanging in rows of black, white and grey. The clerk eyeballed me and then explained that everything in the store was unisex because they didn’t want to box anyone into the oppressive and limiting binary gender paradigm. With three colours to choose from, I wagered there was no risk of that.

It’s easy to feel exasperated with the way we talk about gender identity these days because the conversation itself can feel pretty binary: parody or hate speech, an earnest hipster or an Internet troll. The public discourse keeps returning to these impoverished home plates because the ground in between is ankle-busting terrain.

This shit is hard, and not in the ways people might imagine—harder still if you’re coming off the bench late in the game. I didn’t come out as a transgender male until the summer of 2016, just shy of my 55th birthday. I have no plans to change my name or my body—the pronoun kerfuffle vexes the Catholic grammarian in me. I recoil at “they” but can’t make the leap to “he” either.

Without any obvious changes, my male gender is di cult for people to hold in their minds. I feel saddled with an old way of being seen, and maybe of seeing myself, too.

Late-in-life epiphanies invariably arrive at our doorstep with a suitcase of “what ifs” and considerable grief about what gets left behind. When I came out as male, I lost my lesbian identity. More accurately, it was lost to me. If I identify as male, I’m not a lesbian and if I’m not a lesbian, what does that make Barbara, my female partner of almost 20 years? Confused, for one thing. Sometimes pissed off and, in bleaker moments, heartbreakingly disappointed. Her abiding love doesn’t make my gender any less complex for either of us.

When I was 11, I was sent from my home in New York to an all-girls boarding school in Ireland. The traffic between the older students’ beds at St. Mary’s was astounding.

I was thrilled by the fierce romances and hooked on the operatic drama of the scorched-earth breakups. On Saturdays, the nuns allowed us unsupervised time in the gymnasium to play records, and nobody batted an eyelash when the senior girls slow-danced together. It was a tantalizing peek into my future. I was 15 and back living in the States the first time I was called a dyke. A car full of teenage boys screamed it in unison as they roared past me on my walk home from school. The Doppler effect was a prophetic addition. I wasn’t entirely sure I understood what they meant but I knew I was getting closer, even as they faded away.

At 16, I was failing almost every class at my Catholic high school. When I told my father I could always join the army, he said, “Why would you want to do that? The army is full of lesbians.” The charged silence that followed answered some shared questions we couldn’t voice. I scrapped the army plan and went straight to being a lesbian. I loved it. The sex, sure, but it was more than that. I loved the walk, the talk, the easy shorthand, the softball teams, the bars, the deep belonging, the mysterious longing satisfied, the currency of being desired. I loved breaking hearts and running outsized romances into the ground. This was more than just riotous Sapphic id. There was real love in there. I may not have always known how to tend to that love, but my model for holding fast was nevertheless forged in relationships with women. I got pregnant when I was 29, and that led to a fractious and impractical decade-long detour into a relationship with my son’s father. Eventually I found my way to Barbara.

Before I came out as transgender, I made a list of dire predictions. If I say who I am, I will lose my wife, devastate my son and be rejected by friends and family. I will be a freak, a loser. I will never be happy again. Somehow, incredibly, I didn’t consider that if I am a man, I couldn’t be a lesbian. It never occurred to me that these two realities were inherently incompatible. I believed I could be both. My fears about losing my family never came to pass, but the inevitability I was blind to, the loss of my lesbian identity, knocked me on my ass. I never imagined this hole in my life. I didn’t predict the bewildering sorrow and the panic at being alone without my community of sisters, or the guilty weight of leaving my partner stranded in what was now her own identity.

So much of who I am is rooted in lesbian culture. My politics, my relationships and my feminism were all formed during my years as a lesbian. This bedrock hasn’t shifted and I don’t think it ever will.

Being a lesbian was never just a placeholder for me until I could come out as transgender. That was not my story. I was a lesbian and I was male. I coexisted privately with my gender until it wasn’t peaceable any longer. If that sounds overly simple, it was.

Humans are remarkably—sometimes catastrophically—capable of holding a multitude of mutually contradictory realities. This is only possible for as 17 long as we can compartmentalize these realities and avoid taking in the whole picture at once. When we finally see what’s been present all along, we are forced to reconcile with ourselves anew. Sometimes in my sleep, I’m still a lesbian. In the peculiar fog of first waking, it feels as if I’ve dreamed about my childhood or someone who has died, and I feel awash in grief.

Other nights, I am someone else entirely—someone who has been here all along.

Mary Rogan is a writer from Toronto whose work has appeared in Esquire, GQ, le New York Times Magazine, Toronto Life, The Walrus.